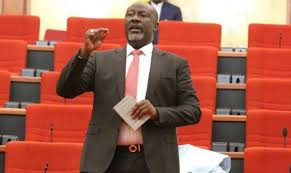 The Kogi State National Assembly/State Assembly Election Petition Tribunal sitting in Abuja has sacked Dino Melaye as the representative of the Kogi West senatorial district in the Senate.

Melaye beat his closest challenger, Smart Adeyemi, and other candidates in the election that was conducted on February 23, 2019 for a second term in the upper legislative chamber.

However, Mr. Melaye has allayed the fears of his supporters saying, “no cause for alarm”.

In a twitter message immediately after the tribunal ruling, Melaye wrote;

There will be fresh election in Kogi West because I will be governor. For my senate mandate, no shaking.”

Adeyemi filed a petition before the tribunal to contest the result, alleging that the process was plagued with irregularities and disorganisations.

The tribunal agreed with him and annulled the election in a ruling delivered on Friday, August 23.

In a unanimous judgement, the three-member panel, led by Justice A. O. Chijioke, ordered for a fresh election to be conducted in the district.

Melaye has taken to his Twitter account (@dino_melaye) to say there’s no cause for alarm over the ruling.