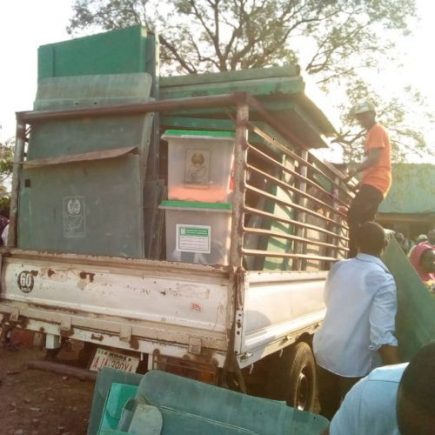 Ready to go: a truck taking out polling materials in Kogi[/caption]

The Independent National Electoral Commission (INEC) said it has dispatched both sensitive and non-sensitive materials to the Registration Area Centres (RACs) in Kogi for today’s election.

The centres at the ward levels are located in Mopamuro, Kabba/Bunu and Yagba East Local Government Areas of the state.

Both Aje and Aiyegbajeje commended INEC for the timely distribution of the materials, accompanied by security personnel.

The atmosphere at some RACs visited was peaceful, while two armed police personnel were seen on ground at each RAC visited.

Governorship election would be held across the 21 LGAs of Kogi, while National Assembly re-run election would also hold in Kogi West senatorial district, simultaneously on Saturday.