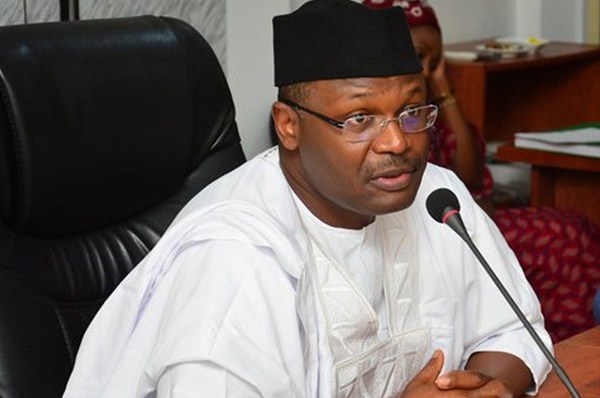 The Independent National Electoral Commission, INEC, on Wednesday, gave reasons why it declined to void results of the recent governorship elections in Kogi and Bayelsa States, insisting that no law in Nigeria empowered it to cancel an election.

The electoral body which took the position at an interactive session the Nigeria Civil Society Situation Room organized in Abuja to review some lapses they observed in the gubernatorial polls that held in both states on November 16, maintained that section 26 of the Electoral Act only gave it the power to postpone an impending election.

Speaking at the event, INEC’s National Commissioner of Information and Voter Education, Mr Festus Okoye, said the commission was helpless, despite several protests it received for election results from the two states to be cancelled.

He decried that the judiciary had in some of its recent judgments, made matters worse for the electoral body when it held that INEC chairman lacked statutory powers to cancel any return that was made by the Returning Officer in any election.

Okoye said it was not enough for the CSOs to advocate for an urgent review of the present Electoral Act when the political elites had continued to sabotage the democratic process.

He said: “My understanding of the whole issue, especially on Electoral reform is that electoral designs alone will never and can never solve the problem or our electoral challenges unless we have a concomitant will. Unless the elites in this country believe in our democracy and the democratic system, even if we amend our laws 100 times it will not solve our problem.

“I say this because, on the issue of cancellation and whether INEC could have cancelled the elections, my own understanding of the rules of interpretation is that when the intention of the legislature is very clear, you give a particular provision its ordinary meaning. You can’t give any other meaning into the provisions of the law if the intentions of the lawmakers are very clear.

“I believe that the intentions of the lawmakers can be deduced from the clear wording of section 26 of the Electoral Act. It gives the Commission the power to postpone, not cancel an election before the election starts.

“My second point is that if you look at the decisions of the Supreme Court in relation to our processes and procedures, it states clearly that the moment a presiding officer has announced the results from a polling unit, the Chairman of INEC does not have the power to cancel the result from the particular unit. In other words, each polling unit is sovereign in its own right. So the fact that there is a problem in one polling unit does not concomitantly mean that there is a problem in another polling unit.  The moment a presiding officer has announced, there is nothing we can do about it.

“They simply went to court and the court said look the moment a Returning Officer has made a return, only a court of law can reverse whatever was done.

“The third point relates to the whole issue of section 177 of the Constitution. Just before the elections, the political parties were asked to submit names and list of their candidates. About seven of them submitted under-aged candidates and we said that those nominations were invalid and we would not take it because we believe that we are the regulatory agency and that since the Constitution said that only a Nigerian by birth can contest governorship election, that it would be irresponsible for the Commission to sit back and then a Chinese national will be nominated to contest governorship election and in the affidavit the person said I am from China, or somebody is nominated and the person said I am five years old and there is an affidavit backing it.

“Another issue I need to raise related to the result sheets. It is true that in the Kogi election you will not find the SDP and the APM on the result sheets, and it is true that we asked the presiding officers and the collation officers to fill in the names of SDP and APM in then result in sheets with a pen. But both political parties were in the ballot which we printed two weeks to the election.

“We rushed back to the printers, discarded the ones we had already printed and then printed fresh ones. These are tax-payers money. The courts that gave the order two days to an election that we should print fresh ballot papers and put the political parties on the ballot, it seems to me that they don’t even understand that our ballot papers are printed to currency standard and that sometimes we don’t even print the ballot papers in Nigeria based on the law deficits we have in the electoral process.

“So I am saying that postponing an election is not a child’s play. It is something that an election management body must think through, this is because a month before the elections, we moved the non-sensitive materials to Kogi and Bayelsa. A month to the election, we trained all the presiding officers and other electoral officers. We printed out ballot papers and result sheets.

“I agree that there was violence in Kogi and Bayelsa and I tell you that after the Nembe incident, half of the collation officer we had trained and brought from the universities withdrew from the process on the ground that we cannot guarantee their safety. So there are challenges with the electoral process and our plea is that we must understand some of these challenges and proffer solutions to them”.

More so, the INEC National Commissioner said there was a need for the country to have a re-think over the concept of the Smart Card Reader Machines, contending that they have become “obsolete and redundant”.

“So as far as I am concerned, the Smart Card Reader has become a redundant instrument and inconsequential. So there are challenges and there are problems with our electoral process but I want to assure you that this particular Commission has the courage and presence of mind and has the drive to bring in new innovations and new creative ideas on the table in order to improve our electoral process.

Earlier in his remarks, Mr Clement Nwankwo who is the convener of the Nigerian Civil Society Situation Room, a coalition of over 70 organizations that monitored elections in Kogi and Bayelsa states, called for a holistic review of the extant electoral laws in the court.

He urged INEC to ensure that it properly interpreted relevant electoral laws whenever situations called for it, and be able to muster to cancel elections when necessary.

SANWO-OLU TO CDC’S: MONITOR STATE PROJECTS IN YOUR COMMUNITIES