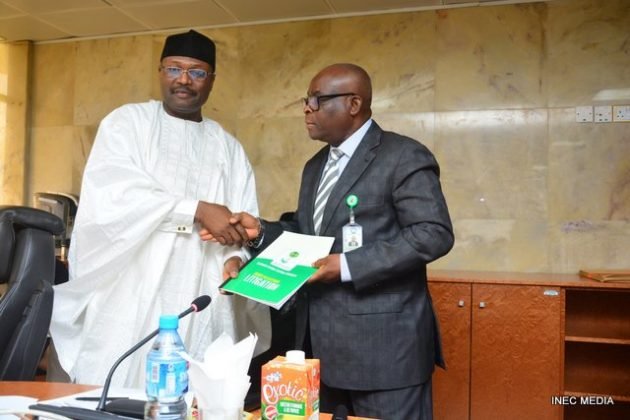 The Independent National Electoral Commission, INEC, has called on the Chief Justice of Nigeria, CJN, Walter Onnoghen, to help address the spate of conflicting judgments on electoral cases in the country.

The Chairman of INEC, Mahmood Yakubu, according to the commission’s online newspaper, inecnews.com, made the call when he led members of the commission on a courtesy visit to the CJN on Wednesday in Abuja.

Mr. Yakubu expressed worry over the recurring decimal among courts of coordinate jurisdiction on the same subject-matter, especially in cases related to pre-election, post-election and leadership crises in political parties.

The INEC Chairman said that apart from the enormous cost implications of the conflicting judgements on the country, it had also created a negative public perception.

Mr. Yakubu said that it had become imperative to draw the CJN’s attention to the commission’s areas of concern, with the 2019 General Elections barely a year, for which the Timetable and Schedule of Activities had been released.

“For instance, in a recent leadership crisis in one political party, the commission was served with six conflicting judgments and orders from courts of coordinate jurisdiction within a short period of three months (May – July 2016).

“Similarly, the commission was confronted by conflicting pronouncements by the lower courts on matters already decided by the superior courts, including the Supreme Court.

“This is making the work of the commission very difficult and creating unnecessary negative public perception of INEC and, I must say, the Judiciary as well.”

He disclosed that in the course of discharging INEC responsibilities, “no public institution in Nigeria is subjected to more litigations than INEC.

“This is in addition to 680 cases determined by the Election Petition Tribunals, arising from the outcomes of the 2015 General Elections, making a total of 1,134 cases, so far.”

Yakubu expressed satisfaction with what he described as a “productive working relationship” between and the Judiciary and INEC.

He recalled that in 2011, the commission was inundated with numerous and sometimes conflicting ex parte orders from courts of coordinate jurisdiction.

He added that it was the CJN’s intervention following an appeal from the commission that averted a major threat to the electoral process.

He said that the intervention stemmed the frequent use of such orders in election litigation in Nigeria.

“We hope that by addressing these issues, the judiciary would further assist the commission and, indeed, the country in growing our democracy.”

The chairman explained that as a demonstration of its commitment to the rule of law, the commission obeyed all court orders and carried out all consequential actions since the 2015 General Elections.

He said INEC also conducted all the 80 court-ordered re-run elections and had issued Certificates of Return to 23 petitioners declared winners by the Appeal Tribunals.

He assured the CJN that the commission “shall continue to obey court orders, while taking full cognizance of judicial hierarchy at all times.”

Mr. Yakubu presented the commission’s compilation of some of the issues critical to election litigation in Nigeria and its recommendations to the CJN.

Mr. Onnoghen, in his response, agreed that both the judiciary and INEC were the foundation of democracy in Nigeria.He said conflicting court orders were bound to arise as a result of the multiple court cases filed by politicians at different courts.

He said that the multiple court cases were bound to have different facts and different interpretations by the different presiding judges.

“The beauty of the system is that it has a way of correcting itself.

“That is why you have the appellate system to take care of errors and mistakes committed in the course of court proceedings and in respect of substantive law,” he said.

The CJN said the judiciary was aware of the enormous responsibility before it, assuring that it would remain committed toward deepening democracy and improving the system.