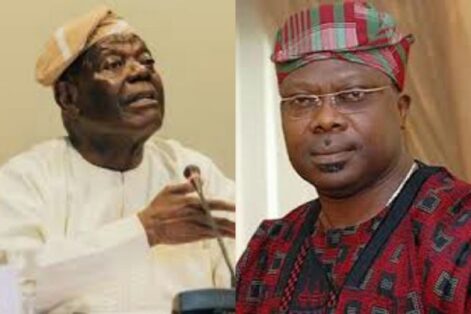 Akande, in his autobiography, “My Participations,” unveiled on Thursday in Lagos said Omisore came in full force and that he regretted he did not know him in his true colours.

“Iyiola Omisore crept into my life like a silent malignant cancer. He came in full force. In a few months, I thought I knew him. I regret I did not know him in his true colours,” he lamented.

He said since Omisore was introduced to him by Yekini, popularly known as Bisi Adedotun, he started visiting him regularly in Lagos and Ila and “calling me Baba, while I called him Iyiola.”

”Every place in my home, including my bedrooms, was made accessible to him even though I did not bother to know his house or wherever he might have been coming from. I very much admired Yekini and by intuition, I merely transferred the same admiration to Iyiola Omisore,” he said.

Akande said at the initial time, he did not want to use Omisore for his running mate but that pressure mounted on him to use him.

He said Omisore’s closeness to the Abacha regime made matters of trust difficult, but that he had to settle for him afterall.

Akande said the Alliance for Democracy, AD, later won the election in Osun in January 1999.

”It was part of my immediate problems after the election that Sola Akinwunmi who seemed to have had a very soft and kind disposition for Iyiola Omisore began to alert me about Omisore’s disloyalty. They were earlier close friends because Akinwunmi, as an article of faith, wanted me to become the governor of Osun State at all cost.

”He entered into friendship with whosoever shared that faith with him. Sooner after our election, Sola Akinwunmi, as the then secretary to the party, was disappointed at Iyiola’s attitudes towards me,” he said.

Akande said Omisore was reported to have been withdrawing some party funds from Sola Akinwunmi using his name without his authority.

“He would go to the party secretariat and use my name to collect money, sometimes, N100,000. On one occasion, Ayo Opadokun lost his father in Offa, Kwara State and we thought we should honour him. I said I would visit him. I funded a gift from my own pocket for my visit to Opadokun in Offa.

”Then, one Omisore’s messenger came and met me with Opadokun. He whispered to me that his boss sent him to give money to Opadokun and also give him N50,000 on my behalf. I told the emissary not to worry about mine because I had already seen Opadokun. It was later I learnt that Omisore took money on my purported authority from the party secretariat for the simple act of condolence,” he stated.

On another occasion, Omisore was said to be collaborating with the Commissioner of Police to impose ADC of his choice on me, but said the plan was exposed and thwarted.

Akande also said when Peugeot 504 cars were being given to every governor-elect by the military authority, as take-off transport needs to the governor before inauguration, Omisore was said to have used his name without his authority to collect the four cars from the then Osun State Secretary to the Government-Elder Femi Adelowokan.

”He sent one to me and appropriated three to himself. I then requested for the other three cars. After a while, he claimed one was snatched by robbers on the way to Cotonou in Benin Republic and that another had a serious accident. So, he never brought the remaining three cars,” he said.