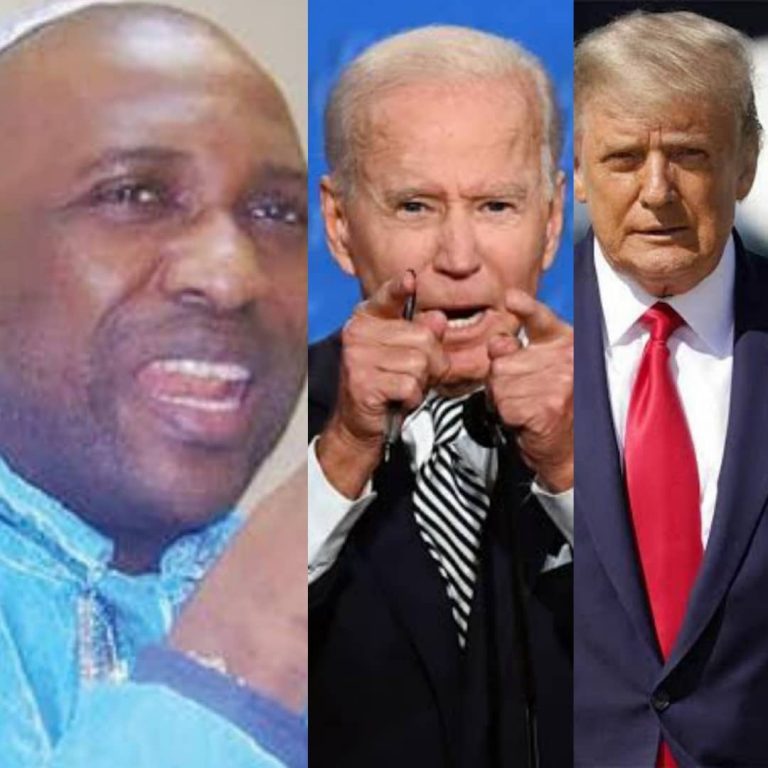 In just two days to the US Presidential election, The leader of INRI Evangelical Spiritual church, Primate Elijah Ayodele has given a strong warning to the candidate of the Democrat Party, Joe Biden amidst the tension of the election.

Primate Ayodele made it known in a live service that consists of several government officials that Joe Biden shouldn’t rejoice over the places that He is leading in some of the polls that have been carried out, but should restrategize and get radical in his approach, if truly he wants to unseat Donald Trump as the President of the most powerful country in the world.

He declared that the only way Joe Biden will not lose the election is if he focuses on some states in the United States which include Ohaio, California, pennsylvania, Wisconsin, Colorado and that if He loses in these states, Donald Trump will win the election.

According to him, Trump still has some technicality to come ahead of Joe Biden unless He uses his weaknesses against him.

Meanwhile, He made it known that Joe Biden has all it takes to defeat Donald Trump but He needs to work seriously on the electoral college.

‘Joe Biden should not rejoice yet if at all He is leading in any part of the country according to the polls, Trump still has some technicality to come ahead of Joe Biden unless Joe Biden uses Trump weakness to defeat him and work seriously on the electoral college and some states that include Ohaio, California, pennsylvania, Wisconsin, Colorado.

Mark my word, If Joe Biden loses in these states, He will lose the election to Donald Trump at the end of the day.

If Joe Biden doesn’t strategize all of these, Trump will come back, He has a lot to do to win Trump, he has to be more radical in his campaign before the election in order to unseat Trump.

Joe Biden has all it takes to defeat Trump but he has to be more radical than before otherwise Trump will still come back. He must take election serious, He must use his weakness against him or else Trump will come back.

If Joe Biden doesn’t cover up the electoral college and other processes, Trump will come back, He is ready to come back as the President, All the campaign Joe Biden is leading is Drama, He needs to be more serious in his approaches.

For Trump, He should work very hard to retain the seat or else, Joe Biden will win him. Trump will make efforts on technical ground to win the election’’

Primate Ayodele has over the years proven his call as a Prophet, with the accuracy of many of his international prophecies. Some of the recent ones include the aftermath of Guinea election, Tanzania election, the current happening in Ivory coast, the emergence of Ngozi Okonji-iweala, to mention a few.

When a Bank Puts SMEs First