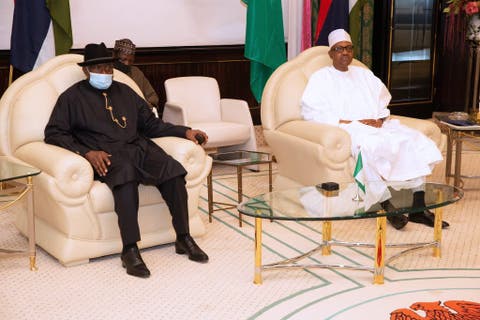 ……My relationship with Buhari “is okay” – Jonathan

Jonathan also appreciated the President for naming a railway station in Agbor, Delta State, after him.

It was reported that Buhari on Saturday approved that the name of the railway station be called the Goodluck Jonathan Railway Station and Complex.

Jonathan, in an interview with State House correspondents on Tuesday shortly after meeting Buhari behind closed doors at the Presidential Villa, Abuja, described the naming of Warri-Itakpe rail station after him as a good gesture by the President.

Their meeting centred on the crisis in Mali and efforts aimed at restoring peace in the country.

Jonathan added, “Let me use this opportunity to commend Mr President publicly. I have already sent a letter to him appreciating the good gesture.

“Completing the railway programme is good. It shows that the President is going on with the legacy projects of previous administrations, and that is the way to go.

“So, I sent a letter to him. I have commended him verbally too. I appreciate it, I thank Mr President, the Minister of Transportation and others that made it possible.”

Only Buhari can decide sack of service chiefs, says Adesina