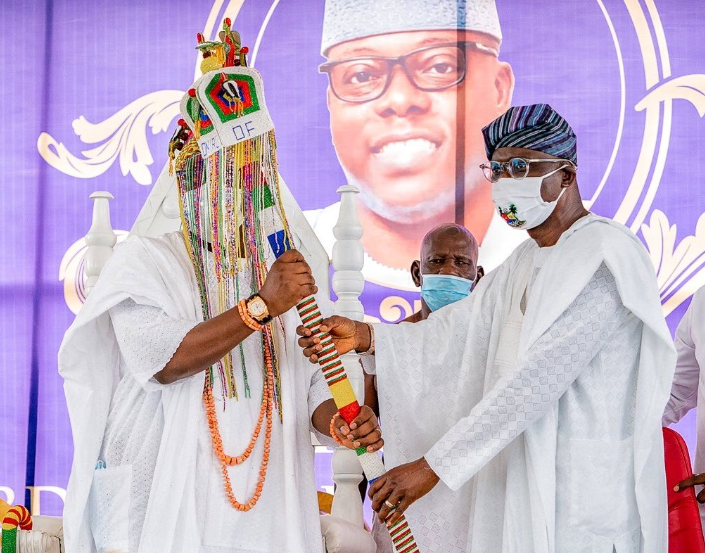 Oniru: ‘Appointment A Call To Life-Long Service To Lagos

At exactly 1:05pm on Sunday, Prince Abdul-Wasiu Omogbolahan Lawal received the traditional staff and officially ascended the throne of Iru Kingdom as the 15th Oniru.

At a simple but colourful ceremony held at the Oniru Palace on Victoria Island, Lagos State Governor, Mr. Babajide Sanwo-Olu, installed the new traditional ruler, saying the event heralded a new dawn and era of prosperity in the kingdom.

The Oniru installation came two days after the State’s Executive Council approved the selection of Lawal, the immediate past Commissioner for Agriculture, who was nominated for the traditional stool by the Abisogun clan of the large Oniru dynasty.

Presenting the monarch to the Governor for formal installation, Commissioner for Local Government and Chieftaincy Affairs, Dr. Wale Ahmed, notes that the process of selecting the new Oniru was fair and open to all contestants. He said the choice of Lawal was well received by kingmakers and citizens of the kingdom.

Gov. Sanwo-Olu, who described the monarch as a seasoned technocrat and distinguished administrator of international repute, said Lawal’s ascension on the throne marked the next phase of Irú journey to the future.

The Governor admonished citizens and residents of the kingdom to rally behind the new king in order to move the city forward. He urged Lawal’s opponents and aggrieved individuals to put the event of Oniru’s selection behind them and join hand with the new king for progress.

He said: “Today is a historic day in the history of Iruland, as we gather to celebrate the installation of the 15th Oniru of Iruland. I heartily congratulate His Royal Majesty, Oba Abdul-Wasiu Omogbolahan Lawal, Abisogun II, the Oniru of Iruland on your ascension to the throne of your forefathers.

“I also rejoice with the sons and daughters of Iru kingdom on this auspicious occasion. It is my firm expectation that you all will rally round the new king and join hands with him for the growth and progress of Iruland, and Lagos State in general. Given the pedigree of the new Oniru, I have no doubt that his reign will be a progressive one.

“There is no doubt that the future of Iru Kingdom continues to be bright and promising, and that the ascension of His Royal Majesty, Oba Lawal, marks the start of the next phase of the journey into that future. I commend the kingmakers and elders of Iruland as well as the ruling houses for the peace and mutual understanding that have characterised the process that led to the installation of the new monarch within a period of less than one year after the demise of the former Oniru. This is a remarkable feat, worthy of commendation and emulation.”

Sanwo-Olu pointed out that Iru land had grown in leaps and bounds in the previous decades to become one of the economic nerve-centers in Lagos, assuring the monarch of the State Government’s support towards the realisation of his vision for the kingdom.

The Governor said the future of Iru Kingdom looked bright and promising, given the leadership credentials of its new monarch. He said Lawal’s performance as Commissioner under three administrations in the State and his legacy in the Ministries of Agriculture, and Housing stood him out as one who will bring further positive transformation to the kingdom.

Sanwo-Olu said: “My administration will continue to accord this part of the State, like all others, the attention it deserves, in terms of infrastructure, economic empowerment, human capital development, and security.

There is no doubt that the future of Iru Kingdom continues to be bright and promising as it begins the next phase under Oba Lawal.”

National Leader of the All Progressives Congress (APC) and former Governor of the State, Asiwaju Bola Ahmed Tinubu, who sent his greetings to the new king through Gov. Sanwo-Olu, eulogised Lawal for his leadership qualities, praying his reign would usher in peace and prosperity in the kingdom.

Chairman of Lagos State Council of Obas and Chiefs, the Oba of Lagos, Rilwan Akiolu, said the event that led to Lawal’s installation as the 15th Oniru was ordained by God and was done in fulfillment of the wishes of the kingdom’s founding fathers.

Akiolu, who went into the history of the kingdom, said the monarch was duly nominated and qualified for the position, having been a descendant of Aromire through Abisogun clan.

Having successfully ascended the Iru stool, Oba Akiolu advised the new Oniru to extend arm of fellowship to his opponents to move the kingdom forward. He urged Lawal to adopt open-door policy in directing the affairs of the kingdom, but admonished him not to tolerate advice that may promote division and cause friction among his subjects.

Akiolu said: “As you are ascending the throne of your fore fathers, I pray that your reign shall be long lasting. Now, you are the king, I urge all sons and daughters of this kingdom join hands with you to move this land forward.

“I advise you to personally make effort and gather all members of the ruling houses and citizens for the sake of unity. You must extend an open arm to everyone, so that you can leave Iru Kingdom better than you met it. However, you must be careful with those that will flock around you as advisers. Don’t tolerate advice that may cause division in your kingdom.”

In his acceptance remark, Oba Lawal, noted that his ascension to the throne was an icing on his public service career and came 85 years after any member of the Abisogun Ruling house ascended the throne.

The monarch praised Gov. Sanwo-Olu for approving his selection, while hailing Asiwaju Tinubu, for years of mentoring in leadership and administration. He waved olive branch to his opponents and promised to pursue an open-door policy in leading the kingdom.

He said: “Iruland is central to the commerce and economic development of Lagos. I want to assure all that Iruland will continue to accommodate business development on all fronts; and remain home for all tribes, and races.

“With my experience in public service, I will continue to work with others not only to bring more development to Iruland but the entire State. I promise to live the rest of my life for my people.”

Oba Lawal started his public service career as a police officer and retired as Assistant Superintendent of Police. He served three consecutive administrations in the State as a Commissioner in the Ministries of Housing, and Agriculture.