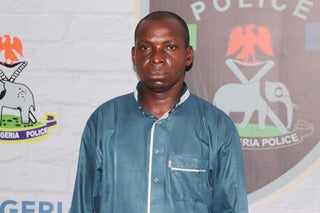 Hamisu Wadume, a suspected kidnap kingpin in Taraba State, has implicated Nigerian soldiers in his deadly escape two weeks ago.

Mr Wadume was re-arrested on Monday night and taken to the Force Headquarters on Tuesday afternoon, where he had been making statements to the police.

The suspect was first arrested on August 6 by a team of anti-crime police officers in Taraba. He was being taken to Jalingo, the state capital, when soldiers manning a checkpoint opened fire on the police team, killing three officers and a civilian.

An expansive investigation has been launched to unravel the culprits behind the violence, amidst claims that soldiers of 93 Batallion and top local police officers had connived to thwart Mr Wadume’s arrest.

At a short appearance before police camera on Tuesday afternoon, Mr Wadume corroborated police’s suspicion that Nigerian Army personnel were involved in the conspiracy that led to the killing of four persons and wounding of others.

He said he was arrested in Ibi, Taraba State, but “on our way out of Ibi, some soldiers open fire on the vehicle I was being transported in and killed some police officers, “ he said.

“The soldiers then took me to their headquarters and cut off the handcuff from my hands and set me free.

“I have been hiding since then until now that the police arrested me again,” he said.

Inspector-General Muhammad Adamu said the arrest would potentially lead to the smashing of other kidnap rings across Nigeria.

The police confirmation came hours after news broke that Mr Wadume had been arrested and taken to the Force Headquarters for interrogation.

A spokesperson for the Nigerian Army, Sagir Musa, did not immediately return requests seeking comments about Mr Wadume’s implication of soldiers.

Although the Nigerian Army confirmed soldiers were responsible for the attack on the police team, it denied that it was deliberate, blaming it on a communication gap that was largely avoidable.