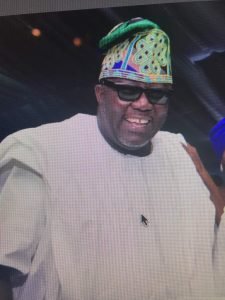 Meanwhile, While friends, associates and Doherty’s teeming followers are said to be daily piling pressure on him to throw his hat into the ring for the next gubernatorial contest, the persuasion is said to be more immense within the fold of People Democratic Party where meaningful and influential members whose views count are asking him to give Governor Ambode a run for his money. Meanwhile, aside being a son of the soil in the Lagos state, the fact that Doherty is exposed, resourceful, intellectually sound and well-loved are advantages he’s armed with. In the same vein, party leaders feel the former governorship aspirant deserves all the support and encouragement  he can get to him contest  as he’s over the year shown loyalty and consistency to the party through thick and thin, especially in a state like Lagos where PDP has never ruled.

Doherty is a successful Nigerian Industrialist, Entrepreneur and politician. He is the founder and Chairman of Dohagro Allied International (DAIN)  Ltd., an industrial conglomerate headquartered in Lagos.

The PDP chieftain started his business acumen at Cargill Nigeria Ltd. Cargill was the largest grain merchants in the world, he worked there in the capacity of regional head in charge of logistics, transportation, warehousing and exportation of cocoa, maize and other grain products. In 1990, he bowed out of employment of Cargill Nigeria Ltd after a service of five years to start his own business, Dohagro Allied International Nigeria Ltd. ( DAIN) and Dain Events Ltd which was incorporated in 1986

1986, Engr. Doherty founded Dohagro Allied International Nigeria Ltd. As an Agricultural Engineer, he aided the grain farmers along the food basket of the South-West Region of Nigeria with Shellers and Dryers to process their grain for market. It was during this venture that he was invited by the Directorate of Food and Rural Infrastructure (DFRI) to join in the establishment of a Nigerian arm of the Multi-national Agricultural Commodity business, Cargill. The mission was to establish a grain procurement system in which semi-processed commodities would be exported to processing plants globally for further processing.

In lieu of his established relationship with the grain-farmers, he was given the position of the Commodity Procurement Manager of the Southern, Eastern and Northern regions of Nigeria within the firm. This position provided him with exposure to the Agricultural Industry in various parts of the North(Saminaka, Jos, Biu, Fontwa, Zaria), South-West(Oyo, Fiditi, Awe, Iwo, Ogbomosho) and East( Abakaliki, Inewi, Aba, Port Harcourt and Calabar) in which he was opportune to short term residency in these areas, thus building a quintessential understanding of the Nigerian Agricultural Industry.

As a kind hearted philanthropist, Engr. Doherty has over the years rendered adequate care and various assistance to the needy and less than privileged including several Non Governmental Organizations and associations which today have also earned him so many awards. Majority of his donations have centered around health-care, education and socio-economic necessities. He was bestowed awards by the Children’s Down Syndrome Association of Nigeria for his efforts and the EDUMARK Recognition award for his aid in providing affordable education for the youth in Lagos State.

Engr. Doherty learnt a great deal about the political history of Nigeria through close association with his late uncle, Barrister Doherty, a close political associate of Obafemi Awolowo and Chief S.L Akintola. The Doherty pedigree radiates his personality, qualities and abilities at different times. In 1999, he entered the political center stage by joining the People’s Democratic Party.

In 2003, he contested for Governor of Lagos state on the PDP Platform. In 2007, he lost at the primaries level to Musiliu Obanikoro. In 2012 he contested for the position of Chairman of Lagos State PDP. He was appointed Secretary of PDP South-West Zone but was eventually given the position as Organizing Secretary. In 2013, the Executive Council headed by Ishola Filani and Former Ekiti State Governor, Segun Oni, was dissolved. Ishola Filani resigned his position to contest in a zonal congress. Engr. Doherty being the highest-ranking officer in the council was installed as the Acting National Vice- Chairman until Filani was returned by court in May 2014. In 2015, Doherty was also actively involved in governorship race.

Majority of Engr. Doherty’s awards were consequences of his business achievements and socio-economic involvement especially in the State of Lagos. A few worthy of mention are:

Engr. Adedeji Doherty was born into the famous Doherty Dynasty in Lagos with the family settlement at popo Aguda Area of Lagos, on 9 March 1962 to Dr. and Mrs. J.A. Doherty. He started his education at Mary Hill Covenant School, Ibadan. Thereafter he preceded to Loyal College, Ibadan for his secondary education. He finally completed his secondary education at C.M.S Grammar School, Bariga, Lagos. He was admitted into the prestigious Central State University Xenia, Ohio, USA. He graduated with an associated degree in Mechanical Engineering and a Bachelors Degree in Industrial Technology.