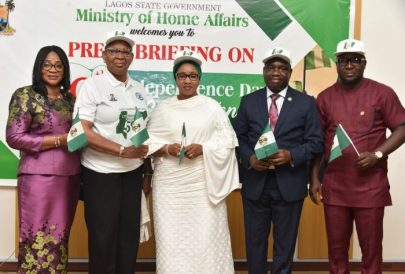 The Lagos State Government has outlined activities to celebrate the 59th Independence anniversary of Nigeria.

Commissioner for Home Affairs and Culture Mrs. Uzamat Akinbile-Yussuf flanked by her counterpart in the Ministry of Information and Strategy Mr. Gbenga Omotoso stated at press conference on Thursday in Lagos that the government was fully ready to celebrate the anniversary.

She disclosed that the Deputy Governor, Dr. Obafemi Hamzat would lead the Executive Council members and other Muslim faithful in the State, to the Secretariat Mosque Alausa, for Jumat Service and Special Prayers for continuous peaceful co-existence of Lagos in particular and Nigeria in general on Friday, 27th of September, while the State Governor,. Babajide Sanwo-olu is billed to lead the Executive Council members and other dignitaries to the Chapel of Christ the Light, the Secretariat, Alausa, Ikeja, for a Church Service.

However, she said the state government had reiterated its commitment to ethic and religious harmony in the state, as religion which had been source of instability in other parts of the country had remained its own source of strength and unity in Lagos.

Akinbile-Yussuf said the state, being the capital of the country when Nigeria became an Independent nation from the British Colonial Rule on the 1st October, 1960 could afford not to roll out drums to mark the nation’s independence.

She noted that the peaceful co-existence of the two major religions in Nigeria – Christianity and Islam, while ensuring that other religious beliefs were not left out in the scheme of things in the State.

“The Ministry of Home Affairs, through the Nigeria Inter Religious Council, (NIREC) has ensured that matters of religious issues that could easily degenerate to acrimony are nipped in the bud on a regular basis, through consultations, consolidation and dialogue.

‘’It will interest you to know that while Religion, which is a source of instability in other states has remained our own source of strength and unity in Lagos, we make bold to say that, Lagos remains the only State in Nigeria that has truly upheld the vision of the founding fathers in Nigeria and those who indeed fought for our Independence as a Nation.

“The likes of Dr. Nnamdi Azikiwe, Obafemi Awolowo, Ahmadu Bello, Pa Enahoro and others will be happy in their graves seeing what Lagos stands for and how we have held Nigeria together as a nation. Today, there is no tribe or tongue that is not represented in Lagos.

‘’Lagos indeed has remained a home for all Nigerians irrespective of tribe or religion and this is the major reason why this Independence Day Celebration is very dear to us as a State and we will not spare any expense to roll out the drums come 1st October, 2019,” she said.