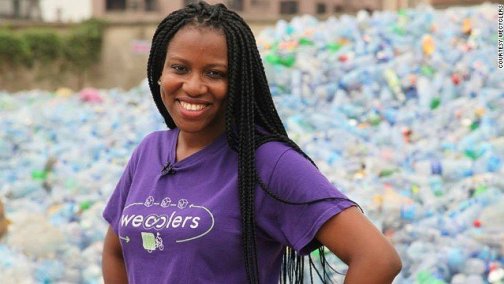 The General Manager, Lagos State Parks and Gardens Agency, LASPARK, Mrs. Bilikiss Adebiyi-Abiola has restated the resolution of the state government to enforce total compliance with the greening provision across the State.

Addressing the media during an enforcement operations in Ikeja, Oniru in Victoria Island, Lekki Phase 1 and Ikoyi environs, the General Manager declared that the pronounced disregard towards greening requirement by private establishments and other property owners across the State was repressing government’s efforts to mitigate the negative effects of climate change.

“Our resolve to enforce the law against recalcitrant corporate institutions and property owners, who have refused to comply with the State’s provision on beautification of setbacks, is in line with government’s quest to improve the green cover in the state“, she added.

While bemoaning the flagrant defiance towards the law by property owners and commercial establishments, the General Manager reinstated that the Act that compelled them would fully be applied henceforth.

“According to Section 19 of the Law establishing LASPARK, all tenement owners and occupiers shall landscape and beautify the perimeter areas of their properties, the neglect, failure and refusal of which shall warrant the penalty of N250, 000 or such sums as the State shall incur in doing same on behalf of the tenement, or six (6) months imprisonment or other noncustodial sentence”, she emphasized.

She noted that owners of commercial properties will be strongly compelled to conform to the stated provision as she called on owners of petrol stations not to contravene the status of approval granted by the Ministry of Physical Planning which stipulated that 20% of their property be reserved for greening.

“It is disturbing that owners of Petrol Stations, particularly the new entrants, have imbibed the act of concretizing their entire surroundings, neglecting the provision of the law which specifically states that a certain percentage of their space must be reserved for greening”, the LASPARK Boss stated.

Adebiyi-Abiola said LASPARK is now poised to begin the prosecution of erring owners of these petrol stations and other commercial properties according to the law unless they showed a desire to abide by the State’s provision, asserting that the State Government through constant public education, enlightenment and advocacy has ensured that business enterprises and Lagosians appreciate the essence of greening.

“We have commenced total clampdown on defaulters of greening regulations across the State. Just last month, a building at Alexander in Ikoyi was sealed off for cutting down trees without the Agency’s permission. We urge those who have been served abatement notices to come forward and engage the Agency for necessary action”, she said.

Speaking further, Adebiyi-Abiola affirmed that the enforcement was a continuous exercise geared towards achieving appreciable conformity and also to constrain prospective property owners anywhere in the State to earmark appropriate portions for greening.

Ganduje implements RUGA, as other govs opt out