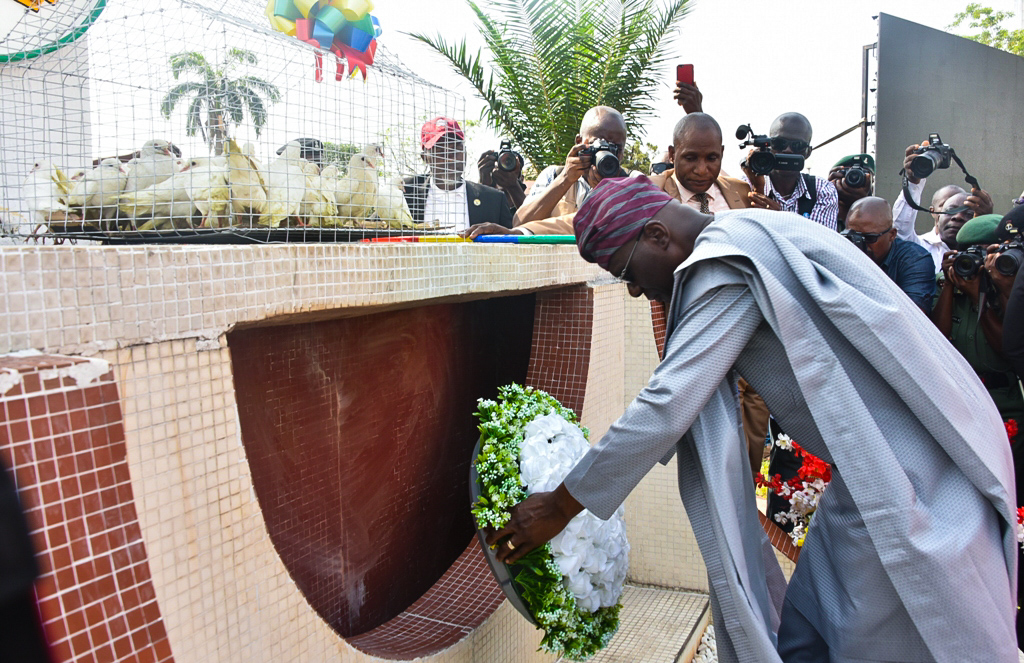 Lagos State Governor, Mr. Babajide Sanwo-Olu, has charged Nigerians to always make sacrifice for peace and desist from actions that may divide the country along its fault lines.

The Governor said the citizenry had a responsibility to keep Nigeria on the path of sustainable prosperity and unity, saying such remained the best way to honour the patriotism and bravery of men of the Nigerian armed forces who died in the course of protecting the country.

Sanwo-Olu spoke on Wednesday after he laid the wreath in commemoration of the Armed Forces Remembrance Day held at Remembrance Arcade at Tafawa Balewa Square. The event is held yearly to honour soldiers and officers who died in the course of carrying out their constitutional duty.

The Governor observed that labour of the fallen heroes would not be in vain if citizens remained resolute in defending the unity of Nigeria.

He said: “Today’s event is very significant, because it is being held in honour of those who laid down their lives to defend our country and keep it united. We will continue to celebrate their bravery and appreciate them for their efforts. As a nation, we must continue to ensure that all their efforts did not go unnoticed.

“The event is also an evidence for brave men and women that are currently serving in the armed forces, that government will certainly not forget their service to our fatherland. Therefore, to ensure that our fallen soldiers did not labour in vain, we must make sacrifice for peace and unity of this country.”

Sanwo-Olu reiterated the State’s commitment to working with security agencies to strengthen professionalism in the discharge of their constitutional duties. Lagos, the Governor pledged, will remain friendly and maintain non-discriminatory approach towards members of armed forces seconded to the State for duties.

He said the State Government had also been supportive of retired military personnel and spouses of fallen soldiers.

The Governor said no fewer than 2,000 members of Nigerian Legion, who are mainly ex-servicemen, had been engaged by Lagos Government to support security operations across the State. This, he said, underscored the Government’s readiness to continue to improve welfare of ex-service personnel and honour their bravery.

Sanwo-Olu also disclosed that his administration would be catering for the spouses of fallen soldiers through empowerment scheme of the Ministry of Women Affairs and Poverty Alleviation.

He said: “We do not want the wives of our fallen heroes to live in abject. Lagos Government will be supporting them through our empowerment programme being run by the Ministry of Women Affairs and Poverty Alleviation that deliberately caters for widows.

“We will correct their narratives and I can assure you that widows of our fallen heroes will be targeted in our empowerment scheme. We also can have a special social programme which will target them. We will extract information and reach out to them.

“We will make sure that in our next programme, we deliberately look for all of the widows of our fallen heroes and give them empowerment. It is for the Government to be able to give them empowerment, so that they can continue to fend for their families and themselves.”

The event was graced by commanders of all security formations in the State, and top functionaries of the Lagos State Government, including the Secretary to the State Government, Mrs. Folashade Jaji, Head of Service, Mr. Hakeem Muri-Okunola and members of the Governor’s cabinet.