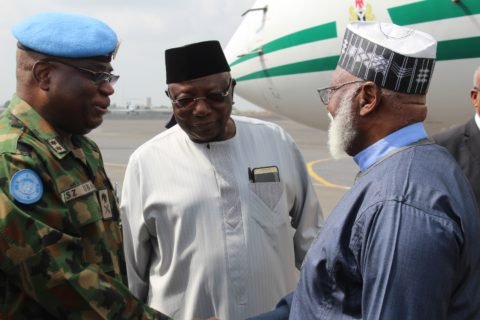 Abubakar told the News Agency of Nigeria (NAN) that the development was another testimony of the rapid growth and development of democracy in the continent.

“It is a pleasure to see that in our region democracy is growing from strength to strength.

“Liberia is a sister country to Nigeria, and during the Liberian crisis, the world knows the sacrifice Nigeria made in this country in terms of human and material resources.

“I commend the Nigerian government, the troops and Nigerians who supported Liberia during the crisis to arrive at this day.’’

Abubaka, who led an ECOWAS mediation team that negotiated the setting up of an interim government in 2003 after the Liberia civil war, said the country was dear to his heart.

The interim government headed by Charles Bryant, a mild-mannered and politically obscure businessman, oversaw the election that produced outgoing President Ellen Johnson-Sirleaf in 2005.

He advised the incoming administration to deepen democracy in the country and sustain the peace enjoyed under Johnson-Sirleaf within her 12-year tenure.

“It is an interest for me as the mediator to see the work we did is blossoming from strength to strength.

“That’s why when I had the invitation of both the outgoing President and the president-elect to attend this inauguration, I did not hesitate to come.

“The incoming should build on what his predecessor has done, and also to widen the field of democracy.

“He should learn from his brothers and sisters in the region; his brother Heads of State and Heads of Government.

“He should not shy away from seeking advice and assistance in order help this country,’’

Liberia is witnessing its first transfer of power from one democratically elected president to another in more than 70 years.

The former head of state arrived in a presidential jet, which touched down at the Roberts International Airport in Monrovia at 10:42 a.m.

He was received at the VIP wing by the Nigerian Ambassador to Liberia, Mr James Dimka, and the Force Commander for the United Nations Mission in Liberia, Maj.-Gen. Salihu Uba.

Abubakar is one of the special dignitaries from Nigeria to grace the inauguration ceremony holding at the Samuel Kanyon Doe Sports Complex in Monrovia.

Vice President Yemi Osinbajo is expected to represent President Muhammadu Buhari at the occasion, according to Nigerian embassy officials.

Meanwhile, preparation is in top gear to host dignitaries coming for the inauguration and to put up a befitting show for the first transfer of power from one democratically elected president to another