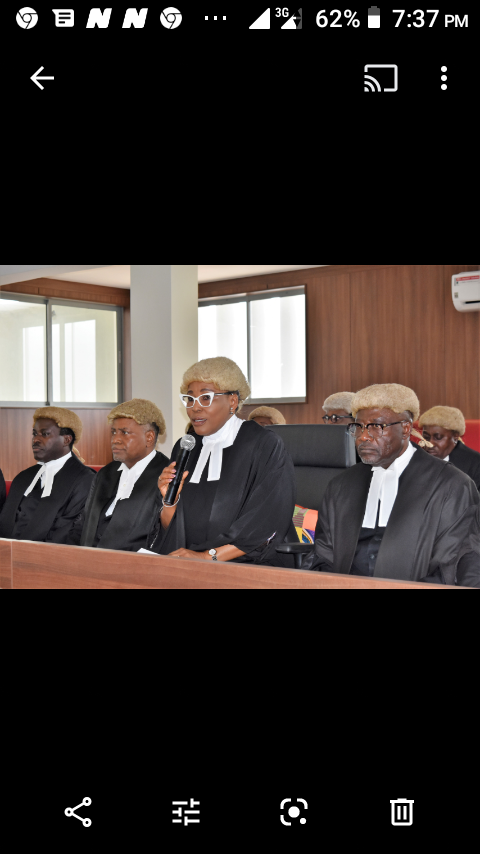 She said that Justice Sodeke was a jurist per excellence and a man of integrity whose commitment to the administration of justice in its purest sense was second to none, noting that the state judiciary and the legal profession as a whole, has indeed lost a great legal mind, an invaluable gem and jurist.

“There is no gainsaying the fact that this erudite legal icon lived a life worthy of emulation and I enjoin everyone here present to weep not at his demise but rather celebrate his life and the worthy legacies he left behind”, Justice Dipeolu said

She added that Justice Sodeke could be best described as a role model, an incorruptible Judge and a gentleman per excellence, saying that his Lordship was a very thorough Judge who would not leave a stone unturned.

“I will personally miss his amiable and radiating personae, his life was a gifted to the legal profession particularly to the state judiciary and indeed to humanity, also, his Lordship’s dexterity and knowledge of law was obvious to all, and was especially evident through his judgement”, Dipeolu added

The Body of Senior Advocates of Nigeria, represented by Sola  Ojutalayo, SAN, said death was a path all mortals must trudge whether voluntarily or involuntarily; it is a visitor we must all receive at a point in our existence willingly or unwillingly.

He said Justice Sodeke was a thorough bred judicial officer who was forged in the crucibles of private practice and public service, saying that little wonder he excelled on the Bench where he dispensed justice with discernible ease and uncanny erudition.

He added that Justice Sodeke presided over various matters with finesse and candour; without fear of the power that be or favour of associates and friends even at a time when access to justice was mere political slogan on the lips of tyrants who held the reins of power under military rule of that era.

“Even though His Lordship has left this sinful world, his legacies will continue to speak for him. These legacies are his good name, his integrity, transparency, good nature, good deeds and his children amongst others”, Ojutalayo said

Also, the Latter Rain Pastor, Pastor Tunde Bakare said that the late Justice was urbane in outlook, princely in carriage, regal in communication, diligent in the discharge of his enormous responsibilities and truly decorous and honourable in conduct and disposition.

He added that His Lordship was indeed a perfect gentleman who would be sorely missed by all who were fortunate to have crossed his path, urging the members of the Bar and Bench to emulate or take a cue from the late jurist.