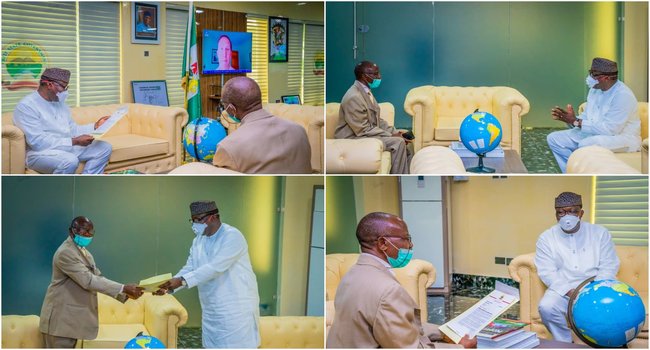 Mr. Adeoye, a father who refused to cover-up for his son that sneaked into Ekiti state, has been appointed as COVID-19 Response Ambassador in Ekiti State.

Governor Kayode Fayemi disclosed this on Thursday after meeting with Mr Adeoye.

Fayemi said, “I am proud of Mr. Adeoye as a principled Ekiti man and I salute his courage in helping us keep Ekiti safe.

“Mr. Adeoye will help to propagate the message as a member of the COVID-19 Task Force in the State.”

Mr Adeoye got the attention of the Ekiti state government after a video of him rejecting his son went viral.

The video was recorded four days ago by one of the security men attached to Fajuyi Pavilion, where the Ekiti State Enforcement Taskforce uses as its base for coordination of daily operations.

In the video, Mr Femi Adeoye refused to cover-up for his son who travelled from Lagos to Ekiti.

Adeoye stated in the video that he had told his son not travel so he does not expose himself to the COVID-19 pandemic.

However, the young man threw caution to the wind and embarked on the journey.

Mr Adeoye said he had reported that his son was journeying from Lagos.

He stressed that he would not take the young man home because his house had no space where his son could isolate himself.

He urged the authorities to take charge and keep his son under close observation.

Having made his case, Adeoye left his son with the security personnel who was making a mockery of him, urging Mr Adeoye to go home with his son, claiming that the son has been tested and certified free of COVID-19.

JUST IN: FG directs some civil servants to resume on Monday