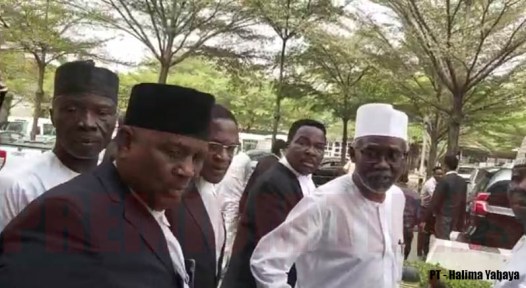 Justice Binta Nyako of the Federal High Court in Abuja, on Monday, granted bail to a former Minister of Justice, Mohammed Adoke, on the same terms and conditions earlier granted by Justice Idris Kutigi of the FCT High Court in Gwagwalada.

Mr Kutigi had on January 30 granted a N50 million bail to Mr Adoke.

The judge also ordered Mr Adoke to provide one surety who must be resident in Abuja and who must have a landed property in the capital territory.

The second defendant, Aliyu Abubakar, also got bail on the same condition.

The defendants were also ordered to submit their international passports to the court and to sign an undertaking to always attend trial.

The court warned that any attempt to jump bail would result in the revocation of their bail.

Re-arraignment
The EFCC, on Monday, re-arraigned Mr Adoke and Mr Abubakar before the Federal High Court in Abuja on fresh money laundering charges.

They were arraigned on seven charges, Mr Adoke had six counts while Mr Abubakar had one count.

The duo are also standing trial alongside others at the FCT High Court in Gwagwalada in Abuja, in respect of the Malabu Oil scam.

The two defendants pleaded not guilty to the seven-count charge when read to them on Monday.

Ruling on the bail application earlier argued by lawyers in the matter, Justice Nyako said she has no more conditions to add.

She said, “I take the same conditions as the FCT high court.

The judge noted that “Even though the case filed before Justice Idris Kutigi, and the one here is different we are both courts of coordinate jurisdiction.”

She said she cannot be sitting as an appellate court over a court of coordinate jurisdiction.

She ordered the EFCC to deposit Mr Adoke’s passport before the FCT high court in Gwagwalada.

After the ruling, the court adjourned to April 1 and 2, for the commencement of trial.

BACKSTORY
The EFCC had been pursuing Mr Adoke for his alleged role in the controversial transfer of Nigeria’s OPL 245 oil field.

PREMIUM TIMES reported how almost half of the $1.1 billion paid by Shell and Eni in a controversial OPL 245 deal negotiated by Mr Adoke and some other officials of the Goodluck Jonathan administration ended in accounts controlled by Mr Abubakar.

The oil multinationals paid the money through the Nigerian government to Malabu, a company then controlled by Dan Etete, a former petroleum minister who the EFCC said is on the run.

Malabu, which was illegally awarded OPL 245 when Mr Etete was a minister in 1998, then transferred about half of the money into accounts partly controlled by Mr Abubakar.

The EFCC alleges that Mr Abubakar distributed the money to some top officials of Shell and Eni as well as some officials of the Jonathan administration.

The EFCC also alleges that Mr Adoke received N300 million from Mr Abubakar in 2013. The anti-graft agency alleges that that was his share of the Malabu windfall.

Shell, Eni, and their officials are already being prosecuted in Italy for the scandal.

Mr Adoke has denied any wrongdoing and said the actions taken in respect of the transfer of the bloc were based on the instructions of former President Goodluck Jonathan and in the best interest of Nigeria.

In 2015, the former minister went on a self-imposed exile outside Nigeria. He eventually travelled to Dubai where he was arrested by Interpol at the prompting of the EFCC.

Upon his return to Nigeria, he was arrested at the Abuja airport and handed over to the EFCC on December 19.