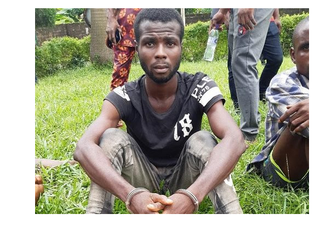 The man whose name has been given as Godstime Ogechi specializes in robbing prostitutes in Ugbiyoko, Egor local government area of the state.

A statement released from the command revealed that Ogechi operates alone and uses a rod that looks like a gun.

He would get the girls and lie to them that he will pay them to spend the night with him then take his victim to a dark street where he would rob them.

Upon interrogation, Ogechi said he has lost count of the number of girls he has robbed.

“I don’t have any gang. I operate along Ekenwan road. I pick street girls at night and rob them. I will chat with them and tell them I want to take them for daybreak. When we get to a dark corner, I will bring out this thing like a gun and threaten them. They will give me their phones. I cannot remember the number of girls I have robbed. I was caught when one of the girls ran away after I have paid her. I went back to the spot I picked her from and demanded for my money. She raised alarm.”

Gov. Bello opens up on why he granted amnesty to 13 suspected armed bandits in Niger State