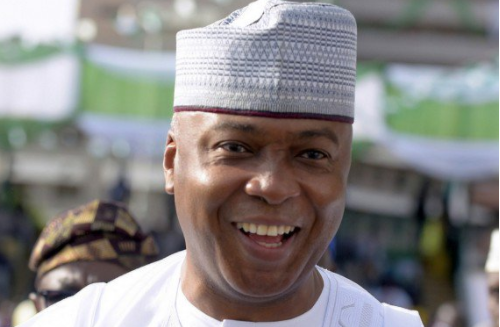 Sqenate President Bukola Saraki has asked Marvel Studios to consider including Nigerian actress, Funke Akindele, in the upcoming series of its Avengers franchise.

Earlier, the Jenifa’s Diary star’s name appeared on the IMDB page of ‘Avengers: Infinity War,’ driving social media into a frenzy in Nigeria.

According to the cast list on IMDb, the online database of information related to entertainment productions, Akindele was to play ‘Dora Milaje’, a member of the Black Panther’s guards.

But to the dismay of many Nigerians, less than a week later, her name was removed and replaced.

Speaking at Georgetown University in the US over the weekend, Saraki made a case for the multi-award-winning actress and producer, urging Marvel to cast her in the movie to increase its African audience.

He said, “Nollywood, which is the second largest movie industry in the world; and is another bold example of people creating a value chain as though from nothing.

“When the first video feature in what would become known as Nollywood, a film called ‘Living in Bondage’ was released in the mid-90s, few could have imagined the huge industry it would spawn, but here we are today.

“Nollywood stars are known the world over, and the industry employs thousands of Nigerians. So influential are these stars that, when news spread recently a major Nollywood star had been cast in a small role in a Hollywood film, Marvel’s ‘Avengers: Infinity War’, Nigerians went wild.

“It turned out to be fake news, but maybe we are on to something. Marvel Studios, if you are listening, if you want an audience of millions in Africa for your upcoming film, then there is a casting decision you need to make.”

Saraki also spoke about the Nigerian music scene and the rapid change recorded in a few decades.

“Another sector that provides value addition and comparative advantage is the Entertainment industry, which has grown tremendously over the last 20 years – especially in Nigeria, Kenya and South Africa – as our artists have risen from local champions to global recognition,” he said.

“Nigerian musician Wizkid recently sold out London’s prestigious Royal Albert Hall, and is much sought after for collaborations with major American Music artists. Whilst interacting with Wizkid recently, he told me he ‘filled a stadium of 40,000’ in Gabon a French-speaking country where they didn’t understand a word of his lyrics; and he himself was astonished.

“The Shoki dance movement went from the back streets of Lagos to galactic heights in the music video of U.S. Hip-Hop artist, Missy Elliot. I remember in my younger days, if you went to a disco party in Nigeria, the deejay would play 100 percent American RnB like Shalamar, The Whispers and Earth Wind and Fire.

“We have come full circle. Our contemporary music industry, by the sheer dint of youthful creativity and innovation, has indigenized.  This is now creating new opportunities, new artists are springing up, new studios are coming onstream, records are being made, talents developed. As far as South Africa and beyond, Nigerian music is being played.”