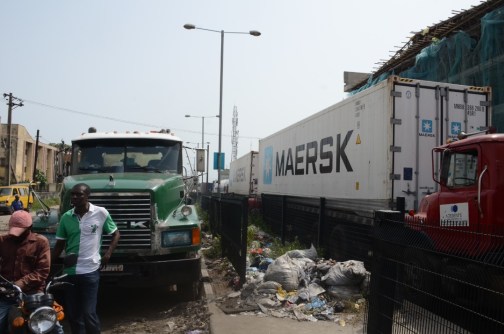 Motorists along Mile 2 – Orile-Iganmu axis in Lagos, on Wednesday, expressed worry and concerns over the indiscriminate parking of trucks, saying the development was exposing other road users to danger.

According to the motorists, who spoke with the News Agency of Nigeria (NAN) in separate interviews, the persistent traffic jam and accidents along the route were linked to the indiscriminate parking by the truck drivers.

“It’s becoming unbearable having these heavy-duty vehicles here. I tried as much as possible to leave my house at Ejigbo around 7 a.m. to beat traffic, but I still got stuck between Mile 2 and Orile-Iganmu area due to the way and manner the truckers reduced the road to one lane. Before I get to my shop, I would have seen more than 300 trucks parked along the road. We want the Lagos State Government to do something urgently about this,’’ Mr. Joe Lekan, a businessman said.

A truck driver, Mr. Samuel Waheed, told NAN that most of the trucks seen along the road were on the queue on their way to the ports. He added that most of them were facing different terminals to off-load their empty containers.

“Why most of us park our trucks on the road is either because we want to off-load or we want to rest. We do off-load at Port and Cargo or T.I.T.C Apapa Tincan Island Terminal. If the government can provide an alternative parking place that is affordable, somewhere better than that of Orile-Iganmu Tanker Terminal, we can gladly move in there,” he said.

The federal government, working with the state government, had, in the past, set up a task force to clear the bridges in Lagos of parked trucks. Months after, the trucks are, however, back on several bridges in the city.