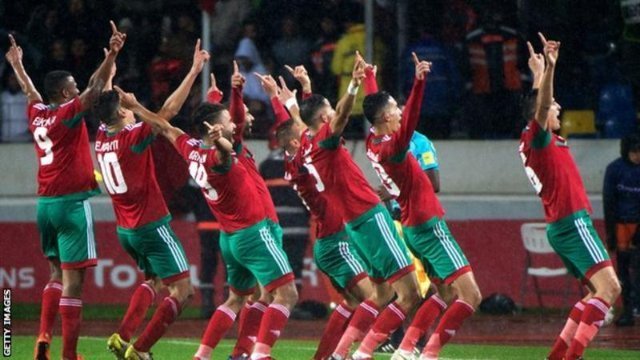 The Lion of Atlas (Morocco) became the first host nation to claim the African Nations Championship (CHAN) title with a convincing 4-0 win over 10-man Nigeria in Sunday’s final.Key moments either side of half-time turned the match in the hosts’favour as Morocco’s Zakaria Hadraf scored just before the break with Nigeria’s Peter Eneji Moses sent-off for a second yellow card just after. Walid El Karti and Hadraf – with his second – added to Morocco’s lead in quick succession on the hour mark.

The rout was completed by Ayoub El Kaabi, who had hit the woodwork twice, scoring his ninth goal of the tournament which is for home-based African players.Morocco’s first chance came in the third minute when Walid El Karti flicked the ball in from close range.

The hosts thought they had scored just four minutes later when Ayoub El Kaabi headed home, only for the assistant referee’s flag to go up – claiming the corner had swung out of play before it reached the striker.El Kaabi then struck the bar with a spectacular overhead kick and Nigeria’s goalkeeper Oladele Ajiboye had two regulation saves to make before Morocco’s pressure told.

Captain Badr Benoun strode down the left wing and pushed the ball through to Abdeljalil Jbira in behind the defence who cut the ball back to Hadraf in the centre to guide the ball home.Nigeria relied mainly on long balls forward for their attacks and Morocco’s Anas Zniti did not have a serious save to make before half-time.

Just two minutes after the break Peter Eneji Moses was sent off for a second booking after a clumsy late foul on Mohammed Nahiri.On the hour mark Morocco doubled their lead when El Kaabi’s overhead kick hit the post and rebounded out for El Haddad to fire in another shot which Ajboye could only parry, leaving El Karti with an easy header.

Three minutes later Hadraf scored his second after El Haddad’s cross fell to him via a deflection off Kalu Okogbue and another Ajiboye parry.

Morocco’s Ayoub El Kaabi scored against Nigeria to finish as the tournament’s top scorer with nine goals.El Kaabi finally got on the scoresheet after 73 minutes when the ball ricocheted around the area and fell at his feet for him to grab his 9th goal of the tournament.In truth, Nigeria’s 10 men were unable to threaten Morocco at all in the second-half with Anas Zniti untroubled in the hosts’ goal.

El Kaabi’s goals saw him named man-of-the-tournament and will have caught the eye of Morocco’s full national coach Herve Renard who was watching from the stands, as he looks to finalise his squad for the 2018 World Cup in Russia