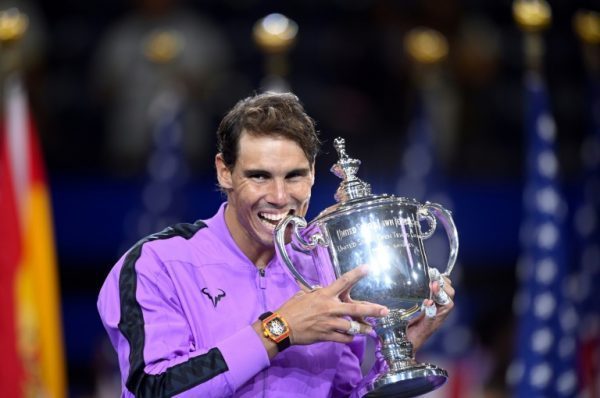 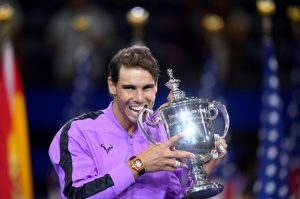 Rafael Nadal outlasted Russian Daniil Medvedev in almost five hours to win a fourth US Open title and also 19th Grand Slam, one shy of the record 20 being held by Roger Federer.

In the thrilling final, Nadal fought back to overcome a slump that saw his two set lead 7-5 6-3 neutralized by Medvedev, who won the next two 7-5 6-4, to set up a fifth set decider.

But even the final set was a thriller of its own. Medvedev did not just allow Nadal to run away with the title when Nadal was serving for the match and championship at 5-2 as he broke him to go 3-5.

Medvedev held serve to make the match tantalisingly too close to call at 4-5.

With Nadal having a second chance to close up the match, the crowd at the Arthur Ashe Stadium waited with bated breadth whether he would founder again. 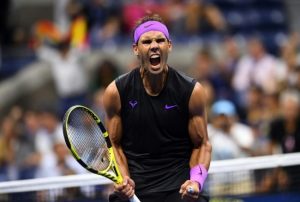 This time, he did not disappoint, although Medvedev took him to the wire, breaking him once.The Spaniard World Number two finally closed the fifth set 6-4 and called the victory a very emotional one for him.

“I more or less had the match under control,” Nadal said.

“The way he was able to fight to change the rhythm of the match was incredible.”

Nadal’s head was in his hands as he became emotional in the moments after his epic triumph, feelings compounded when a tribute video of his Grand Slam titles was shown in Arthur Ashe Stadium. 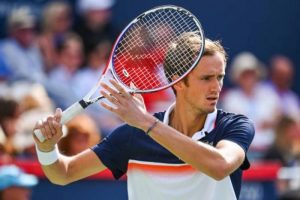 Daniil Medvedev: fought back to win the match, but fell short

“Has been one of the most emotional nights in my tennis career, with that video, with all of you,” Nadal told a cheering crowd that chanted his name several times in the intense final set.

“There’s no stadium in the world that’s more energetic than this one.”

Outside of the French Open, where Nadal took his 12th title in June, the US Open is the Slam title he has captured the most in his career.

“That’s so important,” Nadal said of his fourth US Open crown. “This victory means a lot.

“And the way it happened. It was hard to control the nerves. The nerves were so high after having the match almost under control.”

Nadal has dropped only one Grand Slam match out of more than 200 when he has won the first two sets, that loss coming to Fabio Fognini in the third round of the 2015 US Open.

But he nearly became the first man since 1949 to lose the US final after winning the first two sets.

Nadal will take home $3.85 million for the win, with Medvedev picking up $1.9 million.

Though Medvedev lost, he has established himself as the heir to the dominant three in the game, Roger Federer, Novak Djokovic and his conqueror Sunday night, Rafa Nadal.

Medvedev entered the U.S. Open as a No. 5 seed, and had never advanced past the fourth round.

By Monday, he will become World Number four.

The last 12 Grand Slam tournaments have been won by Roger Federer, Novak Djokovic or Nadal. The last time a player outside the ‘Big Three’ won a major championship was when Stan Wawrinka defeated Djokovic in four sets at the 2016 US Open.

In 2019, Nadal played in three Grand Slam finals, winning two of the three. He lost to Djokovic at this year’s Australian Open, but then extended his own record with a 12th French Open crown in Paris.