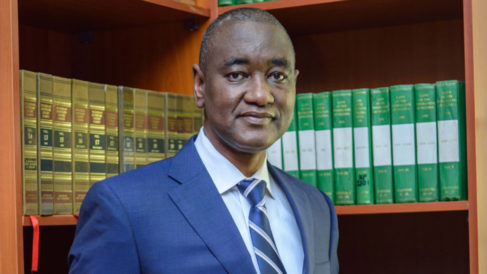 The umbrella body of lawyers in Nigeria said it completely rejected the statement but rather insisted that national security and interests are subject to the supremacy of the rule of law.

The NBA, in a communiqué issued at the end of its yearly General Conference in Abuja, yesterday, also condemned disobedience of court orders by the government.

It also faulted the issuance of executive orders over matters that are in court.

President Buhari has been widely criticised for his comments at the opening of the NBA conference, which began last Sunday.

He had said: “The rule of law must be subject to the supremacy of the nation’s security and national interest.”

But the NBA, in the communique read by its immediate past president Abubakar Mahmoud (SAN), which preceded the swearing-in of newly elected executive officers, disagreed with the President.

The association said it “completely rejects the presidential statement subordinating the rule of law to national security.”

NBA added: “The NBA restates that the rule of law is central to democracy. Any national security concerns by the government must be managed within the perimeters and parameters of the rule of law.

“As a corollary, conference frowns at the present growing trend whereby government decides on which court orders to obey.

“The court has exclusive duty under a democratic dispensation to interpret the constitution and other laws. Government and the citizenry must comply with court orders at all times until set aside.”

On executive orders, NBA said any such order issued in respect of a matter pending in court breaches the principle of separation of powers.

New NBA president Paul Usoro (SAN), who was sworn in along with other officers, said the association would continue to hold government to account.

“Lawyers and their association are not adversaries of government but partners with government in the promotion and protection of the rule of law.

“The NBA’s significant role in that partnership is to serve as the watchdog of society and, in the process, call the government to account. We shall not shirk our responsibilities in that regard,” Usoro said.

He urged his rivals for the NBA presidency to join hands with him in moving the association forward.

“We are strong only when united and together. Divided, we’re vulnerable and subject to external and devastating attacks – and these are the dangers we face daily.

“My immediate task would, therefore, be to heal these wounds, seal the cracks and unite our family of lawyers.

“I have already started the process of such integration and healing by extending my hands of fellowship and brotherhood to my co-contestants, Prof Ernest Ojukwu (SAN) and Chief Arthur Obi Okafor (SAN). But I will go beyond them in the days ahead.

“I’ll seek to heal the wounds of the 2016 NBA Elections by reaching out to my very good friend and brother, Chief J.K Gadzama (SAN) and bring him back into the NBA family. I know that he has plenty to offer to our Association.

“There are also several of our Bar Elders who have stayed outside the NBA fold for several years now for one reason or the other, mostly out of disenchantment; we’ll actively work to bring them back into the fold and in the process harvest from their rich repertoire of intellectual resources, experiences and wisdom,” Usoro said.

The NBA president, among other plans, said he would hold monthly press briefings on the state of the nation and issue quarterly financial account reports of the NBA.