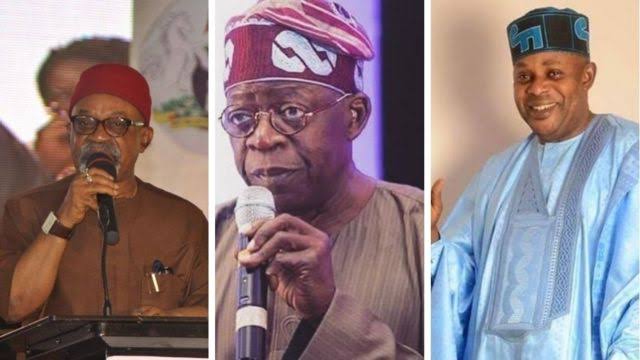 Ngige, who was Anambra former Governor  between 2003 and 2006, is currently the minister of labour and employment.

In a tweet, Akunna said the incident happened when his former boss visited Tinubu.

Akuna was reacting to the statement of Ngige on Asiwaju Bola Ahmed Tinubu while appearing before House of Representative adhoc committee investigating the suspension of the management of Nigeria Social Insurance Trust Fund (NSITF) on Tuesday.

Ngige had caused a mild drama when he told members of house that he’s older than all of them, and referred to James Faleke, member representing Ikeja federal constituency, as a “small boy”.

The minister said he is of the same age bracket with Tinubu, a national leader of the All Progressives Congress (APC) who is seen as Faleke’s political benefactor.

Surprised by Nigige’s utterances, Akuna said the car gift given to Ngige prompted him to later acquire another armoured vehicle.

“In ’04, visiting Asiwaju Tinubu in Lagos, my boss Gov Ngige spotted this car. “Bola, pls dash me. I want to use it in Abuja”. “Ah ah! Ngige, this is old nah”, replied Asiwaju. “I don’t mind. Anambra is poor. I’ll manage it”. Surprised to hear Onwa deriding his benefactor,” he tweeted.

“Did you know how the G-wagon came about? The Lagos trip happened after we literally begged him to buy it. The beast Tinubu gifted him was moved to Abuja. That was Ngige’s “Abuja vehicle” until the CoA removed him in March ’06.

“His official car was a Peugeot 406. After the March 3, ’04, attack on Gov Akume’s convoy, in which an ex-Nig Airways MD Andrew Agom, was killed, my boss agreed to buy the armoured G-Class. It was after the purchase he fell in love with armoured cars. Jagaban’s gift was armoured.”

Ngige neither responded to calls nor replied text messages as of the time this report was filed.

Hushpuppi to remain in U.S detention for 5 reasons