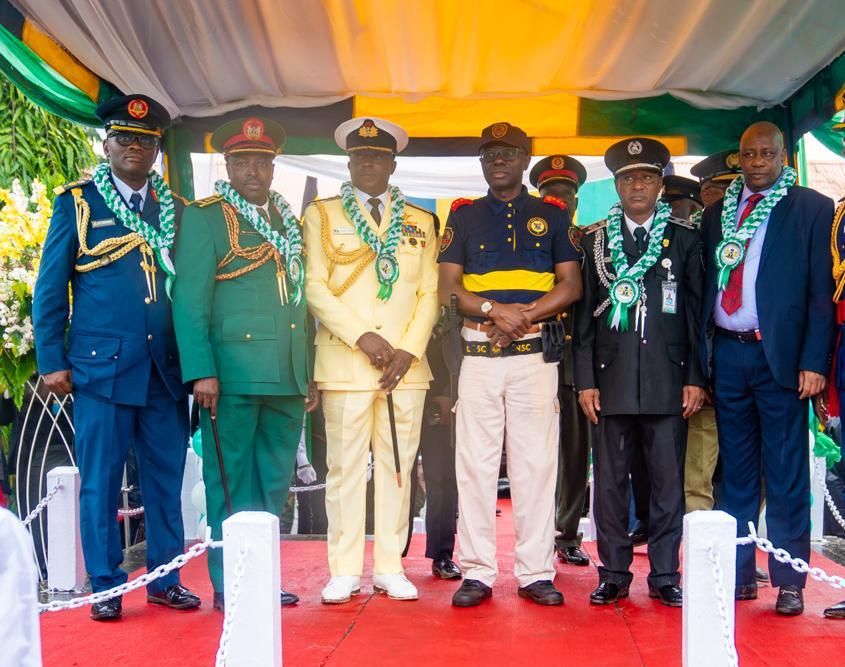 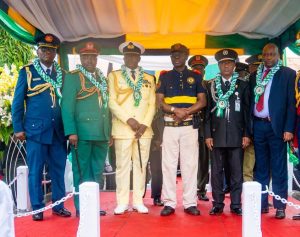 In an uncommon show of patriotism, residents of Lagos State defied the Tuesday downpour and trooped out to witness the parade commemorating the 59th Independence anniversary.

At the event held at the Police College in Ikeja, Governor Babajide Sanwo-Olu congratulated Nigerians, urging them to keep their hope alive and remain united to build a prosperous nation.

Sanwo-Olu, dressed in Neighbourhood Safety Corps’ uniform, said the All Progressives Congress (APC)-led Federal Government and leadership in the State had made irreversible progress to restore the glory of the past and build on the legacies bequeathed by the nation’s founding fathers.

He assured that the effort to rebuild the country and keep it on path of progress remained on course, while guaranteeing that the implementation of his party’s programmes would bring greater good to the majority of citizens.

He said: “Today, we take glory to the men and women who laboured and sacrificed their time, knowledge and resources to see that our nation gained freedom from colonial rule and attained the status of a sovereign nation.

“Since 1960, we have achieved significant progress despite our challenges and setbacks. We have remained united in our determination and desire to build a truly prosperous nation that will be the pride not only to Africans but the entire black race. As we celebrate this year’s Independence anniversary, we must remain committed to achieve our collective aspirations as a nation.”

Sanwo-Olu said his pact with the people of Lagos was to consolidate the foundations laid by the successive administrations in the State in the last 20 years, even as he insisted that his administration remained committed to good governance as the tool to solving the challenges facing the State.

“As leaders in position of authority, we are committed to achieving the greatest good for the greatest number and ensuring that we do what we can to improve and impact the lifes of our people through good governance and our development programmes. It is re-assuring that we are on the right track to attaining greatness and achieving the goal to build the foundation for a sustainable growth; we take pride in the role that our state has played and will continue to play in the development of our nation,” he said.

Sanwo-Olu, who was accompanied by his deputy, Dr. Obafemi Hamzat, stressed the need for Nigerians to remain resolute in sustaining the dreams of the nation’s founding fathers, adding that his administration would ensure Lagos remained attractive to private sector-led investment.

The Governor charged residents to eschew actions that would divide the country along ethno-religious line, pleading for patience as government at all levels rolled out activities to make the system better.

He also pleaded for citizens’ cooperation with his government, reminding them that the task of building the State was a collective sacrifice of all residents.

He said: “I wish to remind you all that governance is not about the people in government alone; it is everybody’s business. I will therefore use this opportunity of this celebration to seek the continued cooperation and support of all citizens of this great State, especially in the areas of compliance to rules and regulations as well as voluntary discharge of civic obligations.”