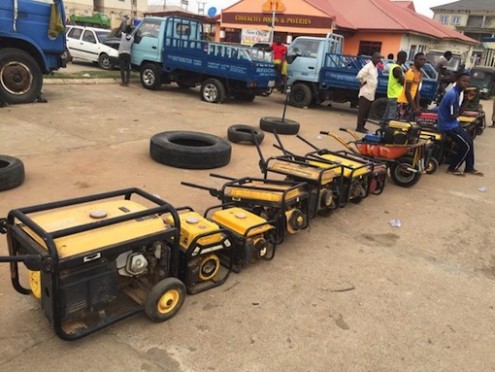 Generators at a filling station

Nigerians have begun to call out their representatives at the National Assembly following the introduction of a bill to ban the sale and use of generators.

The bill titled “a bill for an Act to prohibit/ban the importation of generating sets to curb the menace of environmental (air) pollution and to facilitate the development of the power sector” passed First Reading at the Senate on Wednesday.

According to the sponsor, the bill when passed will stop “the use of electricity generating sets which run on diesel/petrol/kerosene of all capacities with immediate effect, in the country.”

It will also ban the “importation and use of generating sets (generators) in the country and to curb the menace of environmental pollution which leads to potential health hazards it poses to the whole nation”.

However, the ban shall not include generator sets used for essential services such as medical purposes, airports, railway stations, elevators, escalators, research institutions, and facilities that require a 24-hour power supply.

“Approval for exclusion shall, however, be obtained from the Minister in charge of Power, who shall brief the Federal Executive Council quarterly on approvals granted,” the supporting document read in part.

However, many Nigerians who took to social media queried how a country with an unstable power supply would be able to sustain the ban on generators in residential areas, which the bill appears to target.

JJ. Omojuwa
✔
@Omojuwa
There are plans to phase out plastics in the UK by 2025, fossil fuel cars by 2030, net zero emissions by 2050 etc. In Nigeria, someone’s generator packs up, he goes to the NASS: bill for the banning of generator. No timeline. No overarching plan. Nothing. with Immediate effect!

Ada~beke??✨
@blvck_Witch
They want to ban generators??? Loool. This people will just wake up one morning and just look for ways to continue to make life difficult for Nigerians shaaa. This is just very sad.

Johnny Drille
@Johnnydrille
So many stupid bills getting introduced at our legislatures.

Just heard about a bill to ban power generators from the country, a country with a struggling power sector. Smh

IKECHUKWU
@iykimo
The Rubber Stamp Senate is unarguably the worst Senate since 1960:

From hiding the line items of the N125bn budget of NASS to N36bn for renovation of NASS.

From $22.7 Billion loan approval to SocialMediaBill

Now, a bill to ban importation of generators

Zaddy Ajala
@UNCLE_AJALA
From SM bill, to a bill to create agency for repented Boko Haram members, now a bill seeking to ban generators in Ngeria has passed first reading at the Senate, in a country without stable electricity.
We should create more awareness on mental health especially for NASS members.

The next will be to ban trekking.

Emeka Nnadozie
@ChNnadozie
A Bill seeking to ban generators is another frivolous bill that will never be passed.

The sponsor of this bill is a moron, a daft and a waste of tax payers money. It’s a shame Ahmed Lawan and his co-senators from the north have turned the Senate into a caricature

Set Awon Fine Girls ?
@_Teewo
A Bill to ban generators nationwide in Nigeria must be the joke of the day ?. In a country that cannot boast of 24 hours electricity supply. These people should just tell us their crack supplier, let us hail him/her because he/she is doing well ooin?

Tomorrow, someone will say those criticizing govt are tainting Nigeria’s image. Which image? Wetin remain? ??