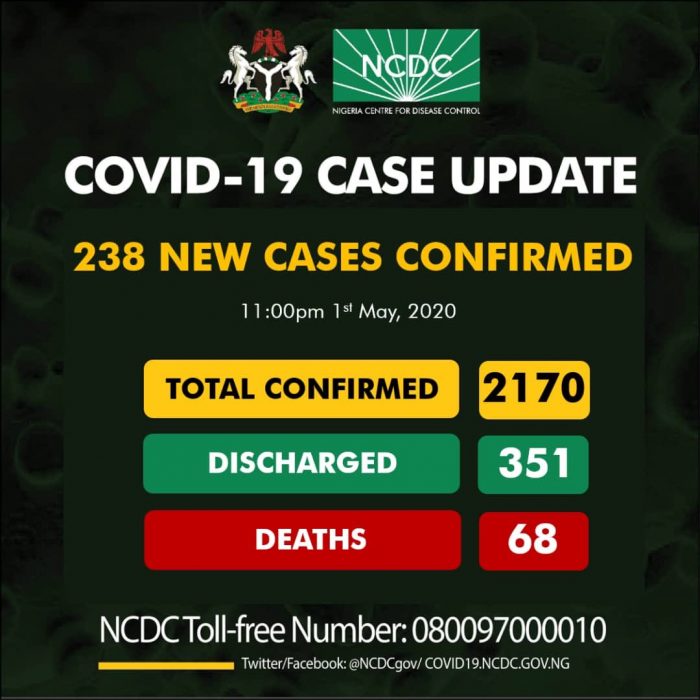 According to the figures released by the Nigerian Centre for Disease Control, NCDC, Nigeria now has 2,170 confirmed cases of Coronavirus.

The virus is seriously spiking in Kano, which recorded 92 new cases, with Abuja having 36 cases and Lagos, 30 cases.

Kano, with 92 new infections has broken the record set by Lagos as the state with the highest number of daily infections. Lagos previous has 87, which has been the highest recorded in a single day.

The virus has also increased in Abuja, with 36 new cases, with Lagos having 30 and Gombe posting 16 fresh cases, while Bauchi ramps up another 10 new infections.

Delta has eight new infections; Oyo, six; Zamfara and Sokoto, five each; Ondo and Nasarawa, four cases each; Kwara, Edo, Ekiti, Borno and Yobe have three new cases each, with Adamawa, two cases; while Niger, Imo, Ebonyi, Rivers and Enugu have one case each.

How States Stand in Friday’s infections

However, Friday’s new cases are the highest reported in a day since the NCDC started compiling the pandemic data in February.

The number of deaths from the virus also moved up from 58 on Thursday to 68 while 351 patients have now recovered.