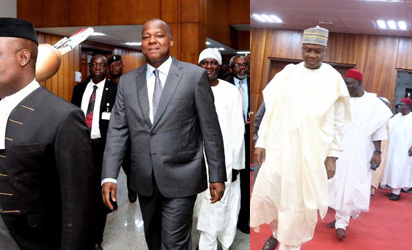 The Senate, after a two-hour closed-door session, yesterday, declared that Nigeria’s unity is not negotiable. This came as the House of Representatives resolved to investigate calls for restructuring by some sections of the country.

House also said it will constitute a committee to aggregate the issues raised by agitators towards addressing the demand for restructuring of the country, as well revisit aspects of the constitution, dealing with power devolution. The Senate position followed a briefing from chairman of the South-East Senate caucus, Senator Enyinnaya Abaribe. The Senate also said it will encourage agitators in the polity to seek peaceful means towards resolving their grievances.

While the Senate was on break, the Indigenous People of Biafra, IPOB, which is seeking secession of the South-East, was declared a terrorist organisation by the military and proscribed by governors of the region. Although, the government later procured a court order to legitimatise its action after Senate President Bukola Saraki faulted the proscription of the group, saying it was unconstitutional. He said the senate would investigate the issue when it resumed.

In the House, the Speaker, Mr Yakubu Dogara, at the resumption from the seasonal holiday, yesterday, also indicated the readiness of the National Assembly to revisit areas pertaining to devolution of powers that were stepped down during the recent voting exercise.

Meanwhile, chapters of the All Progressives Congress, APC, in Sokoto, Zamfara and Kebbi states, yesterday, threw their support behind the restructuring of the polity towards giving more powers to the states.

In his opening address, while welcoming members back from the holiday, Dogara recalled issues that stirred the polity while the House was on vacation. Among the issues he noted were agitations against marginalisation in the South-East, recovery from recession, among others. On a possible way out of the agitations, he said: “We are all aware that during the recess, the agitation by a group of persons based in the South-East geo-political zone of the country and the heightened call by many groups for restructuring of the country dominated discourse in Nigeria. “Indeed all patriotic Nigerians rose in unison to uphold the fundamental rights of all citizens to move freely and reside in any part of the federation as they choose, without let or hindrance. It appears to me that the citizens of this great country have sounded the message loud and clear that they stand for a united, prosperous and just Nigeria. “Do we have a legislative response to the issues that have been thrown up? Is the National Assembly involved in the debate? Can restructuring take place outside the existing legal order? Indeed all the arguments about restructuring are, at the end of the day, legislative issues. It may be necessary in due course for the National Assembly to have a second look at the issues that had been thrown up. The National Assembly as a representative and product of the people cannot act contrary to the wishes and aspirations of its constituents. We need to sift all the ‘noise’ and find out what exactly a majority of our people actually want? This is a responsibility we cannot outsource. “Going forward, it is my view that we need to revisit some aspects of the voting on Constitution Alteration. Luckily we still have the legislative window of conferencing with the Senate, where we have differences.” Following Dogara’s remarks, the House Leader, Mr. Femi Gbajabiamila (APC, Surulere, Lagos) moved for the constitution of an ad-hoc committee to probe various issues raised by ethnic nationalities across Nigeria. He observed that “events of the last few weeks brought Nigeria close to the precipice but for the determination of Nigerians in their various show of commitment to the peace and unity of the country. Hence the urgent need for the intervention of the House of Representatives.” Ruling in favour of the motion, Speaker Dogara said: “There’s no need to debate this matter until the investigations have been concluded. I’ll, therefore, put it to vote.” Immediately he pronounced it, the ayes carried the day without any dissenting voice.

The House resolution was welcomed by the Presidency, which through the Senior Special Assistant to the President on Legislative Matters, Sulaiman Kawu hailed the House on the move. Kawu in a statement yesterday said: “May I use this opportunity to commend the 360 members of the House for unanimously passing a resolution to work for the unity of Nigeria in the face of daunting challenges and threats by certain groups, who are bent on causing disharmony and disunity among Nigerians. “Indeed, there is no better time to come out with such a strong position like now. In the same vein, the lawmakers resolved to work with Mr. President for One Nigeria so as to take the country to the next level of development is laudable.”

Meanwhile, the Senate also after a closed-door session affirmed that the indivisibility of Nigeria as a country was not negotiable, just as it said that it could only support lawful agitations by any group or section of the country. The Senate also resolved that constitutional means must be used to resolve crises in the country, even as it vowed that as an institution, it would use all means within its reach to ensure peace in all parts of Nigeria. These decisions,  gathered, were taken at the closed-door session after the Chairman, South East Senate Caucus, Senator Enyinnaya Abaribe (PDP, Abia South) briefed the Senators on the unfolding issues surrounding the Indigenous People Of Biafra, IPOB, its leader, Nnamdi Kanu, his bail as well as the proclamation that the group was a terrorist organization.

A source told Vanguard that the Senators were however, divided on the issue especially those from the North who were not comfortable with the activities of IPOB, and the hate speeches of Kanu. But at the end of the day, the lawmakers came to a compromise of the need to preach peace and keeping Nigeria as one indivisible nation.

The state chapters of the three North-West states of Sokoto, Kebbi and Zamfara made their submissions to the APC committee on restructuring at its public hearing in Sokoto yesterday. The position of Sokoto as presented by former deputy governor, Chiso Abdullahi, rejected the creation of new states, saying that many states in the country at the moment are not viable. He advocated that the presidential system and fiscal federalism should be maintained as enshrined in the constitution while power rotation and zoning should be maintained to foster national unity while also calling for the abolition of one of the two chambers of the National Assembly. Kebbi State also rejected the creation of new states and bicameral legislature while zoning should be practised between North and South. Kebbi also advocated a revenue sharing formula with Federal Government having 40 percent, states 40 percent and local government areas 20 percent. It also canvassed for devolution of powers whereby the Federal Government should transfer some aspects that will be better handled by the states. Zamfara State, however, disagreed with Sokoto and Kebbi as it called for the sustenance of the status quo on the major issues of derivation, devolution of powers, presidential system of government and land tenure system. Speaking at the meeting, the Chairman of the APC Restructuring Committee for North-west and Governor of Plateau State, Simon Lalong, said all the views collated would be taken back to the APC national headquarters. “At the end of the exercise, all the views collated will be analysed and this will form the opinion of the APC and the federal government,” he said. In his remarks, Sokoto State Governor, Aminu Tambuwal, said the aim of the public hearing was to collate views of the people on how the country should be restructured and governed.