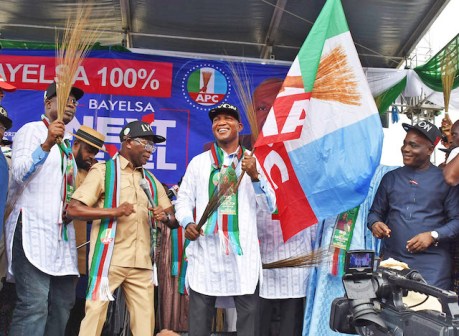 The All Progressives Congress, APC, governorship candidate in Bayelsa State, Chief David Lyon said he is still contesting the gubernatorial poll on Saturday, calling on his supporters not to panic.

A Federal High Court sitting in Yenagoa, had on Thursday nullified the governorship primaries that produced Chief David Lyon as the candidate of the All Progressives Congress (APC), for the Nov. 16 poll in the state.

Delivering judgment, Justice Jane Inyang, held that the primaries were conducted arbitrarily outside the rules of the party.

Senator Heineken Lokpobiri, former Minister of State for Agriculture, had dragged APC to court over alleged irregularities during a direct primary conducted by the party on Sept. 4.

However, Lyon said the Court of Appeal has asked all parties to return to the status quo and called on Bayelsans to come out on Saturday and vote massively for the APC.

Speaking through the Alternate Director General of the David Lyon and Degi Eremienyo Campaign Organization, Prof. Seyefa Brisibe, Lyon asked the people not to be deterred by antics of the Peoples Democratic Party (PDP).

Describing the ruling as a procured judgement, Brisibe urged Bayelsans not to panic but go ahead to vote the APC and its candidate during the Saturday governorship election.

“Let me use this opportunity to let all Bayelsans and our teaming supporters know that there is no cause for alarm. Our candidates, Chief David Lyon and Bishop Degi Eremienyo are fully, squarely on the ballot.

“This is because, we, as law abiding citizens, have done what is proper, judicious and procedural to see that that judgement does not stand.

“I want to appeal to all Bayelsans in the remotest areas, which our next governor stands for, to come out en masse to vote the APC come November 16,” he said.

According to Brisibe, all through the campaign across the state, the APC candidate enjoyed massive acceptance from the electorate following their love for him as a result of his philanthropic work.

Minister of state for Petroleum, Mr Timipre Sylva also confirmed that the Court of Appeal in Abuja has granted the All Progressives Congress (APC) a stay of execution on the judgment delivered by the Federal High Court in Yenagoa.

Sylva, the leader of APC in the state, said this at a news conference in Yenagoa on Thursday.

He said that the APC and its candidate Mr. David Lyon would fully participate in Saturday’s governorship election.

“I must tell you that the judgment nullifying the primary was clearly a biased one with all due respect to the judiciary.

“So, I have come to address you because we have good news for the people of Bayelsa. The court in Abuja has granted us stay of execution.

“That means, we are fully as a party in the position of contesting this election.

“Because we know that the people of Bayelsa are seriously behind us and we will win the election.

“Everyone in Bayelsa knows that APC has the majority in the state and if there is an election today, it is clear even to the blind and the deaf that APC will win.

“The electorate should go en-masse and vote the candidature of the APC, Mr David Lyon,” the minister said.