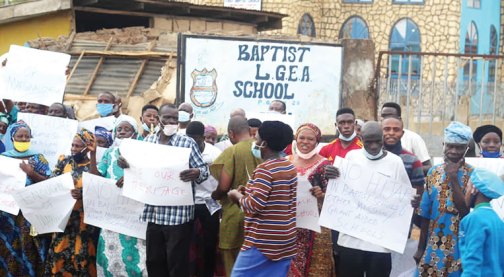 Protest against use of hijab in Kwara Christain schools

The Catholic Bishop of Ilorin Diocese, Most Rev. Paul Olawoore, has said the church was not in agreement with the government over the use of hijab in mission schools.

He also condemned the government’s use of force to take control of mission schools in Kwara State.

Rev. Olawoore although, against the government stance on the matter discouraged any form of violence.

He said, “I don’t want any confrontation that will inflict pain or any kind of injury on anybody. Neither do I wish that anyone should lose his or her life on this issue.”

The prelate who is also Chairman of the Kwara State chapter of the Christian Association of Nigeria, said now is the time to join hands to show that peaceful coexistence and tolerance was the way to go.

Rev. Fr. Ralph Ajewole, CAN’s Director of Ecumenism and Interfaith Dialogue, refuted reports that Christians in the state had agreed to the use of hijab in government mission schools. He described such reports as lies.

“We insist that the Catholic Church rejects and condemns the use of hijab in our mission schools, the cleric said.

“No matter how hard anyone tries to change the narrative, we stand with CAN that the use of hijab is totally rejected in schools built and owned by Christians, he said.