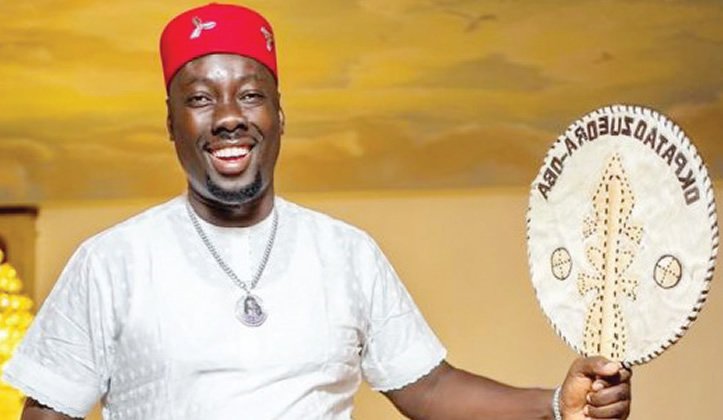 Chairman of Cubana Group, Obi Iyiegbu, popularly known as Obi Cubana, has revealed how he made his first million naira, stating that his breakthrough came after his National Youth Service Corps program in Abuja.

The business tycoon made this known in an interview with BBC Pidgin on Tuesday.

For days, Obi Cubana has been a social media sensation and the rave of the moment, especially with the ‘naira rain’ at his mother’s burial in Oba, a town in the Idemili South Local Government Area of Anambra State.

Several videos went viral that show celebrities, business people and politicians spray money indiscriminately during a concert held after the interment of the deceased.

As many raised eyebrows concerning his lavish display of wealth, the business tycoon has revealed that his riches were as a result of hard work.

The political science graduate from the University of Nsukka underwent his NYSC program in Abuja where he was subject to a monthly allowance of over N100.

With his Place of Primary Assignment at the National Assembly where he earned N2000 monthly, Obi managed with his friends and brothers in a one-room apartment in Zone 4, Abuja.

It was in Abuja that he was introduced to the real estate business, where he met a client who wanted to furnish a house.

“That was the first N1.1 million I made before I joined contract work in Abuja. I signed a contract with PPMC, made a little money, then bought my Mercedes V-boot,” he said.

He revealed that he invested the money he made into a garden beer parlour before he established Cubana, which has now gained national and international prominence.

Obi urged people to desist from thinking that wealth must come through illegal means.

In the same vein, he advised people to be straightforward and honest in their dealings, as that will open more doors of success for them.