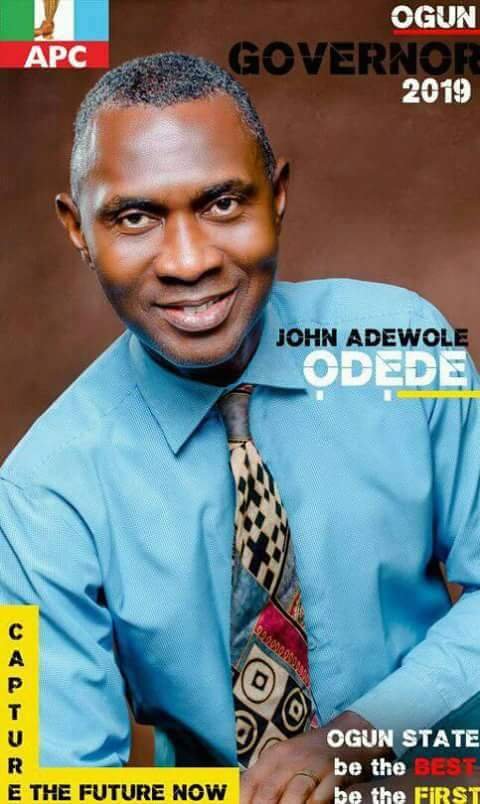 Wole Odede, a former staff of NTA Channel 12 Abeokuta chances to be the Ogun State Governor come 2019 is growing by the day.  He has been preaching his laudable manifestos to the people and the response is encouraging.

On his agenda he said his government will not owe salaries. At the same time other employers in the state will have no cause to owe workers due to conducive environment to operate.

“Government, multinational, small, foreign company, shop owner, Big Boy Resident Abroad, old company, new company, Governor’s wife’s friend… nobody will owe you your pay. Period”. We ALL deserve to live free of fear. We will all live in peace with DIGNITY – that’s industrial peace and prosperity. Our new law will see to that. Smile”, he said on his social media page.

He always tell voters and people of the state: CAPTURE THE FUTURE NOW THE GOVERNORS’ CHILDREN ARE IN LONDON SCHOOLS. WE HAVE A SURPRISE FOR YOU. Our Children Will Read The Same London Books Here.

On education he stated

“We stress practicals, tests and experiments in primary, secondary and technical schools.

Therefore, we acquire the textbooks, workbooks, etc, that are not available here, which are designed to groom tomorrow’s scientists, inventors, discoverers and futurists. Well-equipped laboratories will become common place.

“From the 2O2O/2O21 academic session, universities in Ogun State will not be part of the Joint Admissions and Matriculation Board, JAMB. WHY? * JAMB, we observe, is one of the many ways the Federal Government PROMOTES POVERTY in the land making parents pay an indefensibly high fee to JAMB/FG for the same process that individual universities will still charge parents!”he said.

We see OGUN STATE as ONE CITY with many farms, industries and knowledge/skills centers (schools). And we plan according to that vision. We see that FOUR AIRPORTS won’t be enough. Do you? Good! We see that there is need for MANY SERVANTS. Many selfless servants. Do you see? ( He who wants to be first among you must be the servant to all) Now, open your heart. listen. china is building a city, it’s size is larger than the country called great britain. the world is furiously moving forward without looking at jokers. let’s fly. come on! We are not here to help Ogun State people manage poverty but to FLY out of it into prosperity –  John Adewole Odede Plus.* Light All Day, All Night, Nonstop – jobs.* Ogun State has oil: it’s spelling is A-G-R-I-C – jobs.* Education, First class, free, up to university level with skills acquisition programme – jobs.* Ultra fast internet:  we enter into the trillion dollar digital economy – jobs.* Brand New City.

He is an advocate for reforms in energy act he said.

A) We engage the National Assembly so that the Electric Power Sector Reform Act 2OO5 is amended before I am sworn in in May next year by the grace of God . We will start this week, so get ready to participate.

B) State governments and other establishments are empowered to generate as much electricity as they can.

F) With men these things are impossible, but with God all things are possible.

The Odede Effect as Governor

When I become the State Governor, the way you walk will be transfigured. You’ll walk smarter and better.

Because we’ll be doing fantastic things together, achieving great feats together. Smile. Great!

Your smile will be brighter, broader. You will laugh more and frown less. And I want you to do something:

take pictures of yourself and your surroundings, your street, area, town, now.

Do videos of yourself and your place now because you’re going to be transfigured when I become the Governor of Ogun State. I want you to see the difference and remember it and be able to show your grandchildren the pictures and say

“This is how things were before John Adewole Odede became the Governor. See how much more beautiful everything is now.

— our brand new city, our own Dubai

— football, athletics at the highest level.

Don’t be overwhelmed; they are nothing special.

We can do them all. And we will. By the Grace of God.