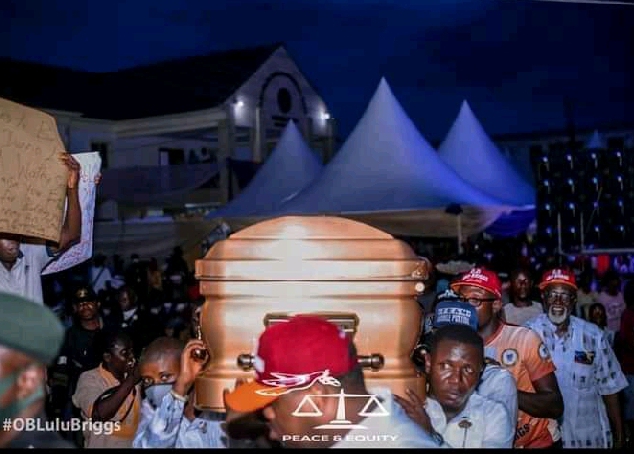 Family, friends and associates Saturday gathered in tribute to oil mogul, High Chief Dr. O. B. Lulu-Briggs as his body was finally interred at a memorable funeral in Abonnema on Saturday.

There was aalmost a two year delay bringing the body to the pavilion for the commendation service, but just as the funeral service was to begin, Governor of Rivers State and his delegation which included Donald Duke and his wife left the event.

The reason for their abrupt departure could not be immediately determined.

Since Lulu-Briggs death in Accra, in December 2018, there have been controversies surrounding his Burial following disagreement between family members.

Despite the two years delay induced by protracted family litigations over his vast assets, Lulu-Briggs burial plan in 2021 without the involvement of his widow, Seinye Lulu-Briggs, had further depend the controversy.

Jonathan told the gathering that the late Lulu-Briggs lived a life that touched lives.

His words, “I knew Chief O. B. Lulu-Briggs and met him in 2007 when I got involved in national politics as vice president and had to oversee the Niger Delta Region.

“He was one of those who were recommended that I should work with. And it worked exactly as said. He helped us in many ways in Government.

“Chief was a very sophisticated man. Though he started quite small, see how he ended big; by this teaching us a big lesson that it does not matter how small you start, what matters more is how you end your life.

“We are all gathered here because the Chief lived a life that touched lives.”

In his short opening prayer, Onaiyekan touched on the theme of love and unity, urging the family to carry forward the good works of their principal. The body was lowered into mother earth around 4pm at the family fault.

Temitope Ajayi, Mama Diaspora opens up on real reason she is passionate about youth empowerment