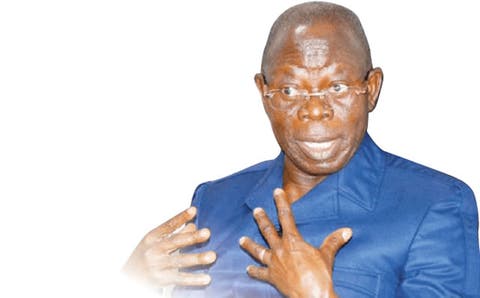 Through the years he has spent in the limelight as labour leader, state administrator and politician, former Edo Governor and Nigeria Labour Congress (NLC) President, Comrade Adams Oshiomhole, has always had his circle pierced by the arrow of death, be it from road crashes, accidents or assassins.
Several of these fatalities have flown right over Oshiomhole’s head and not a few people consider it a mystery that the former National Chairman of the All Progressives Congress (APC) usually managed to escape without a scratch, while his travelling companions and unfortunate associates bore the brunt in sorrow, tears and blood.

About one of these victims, Wale Adeoye, Executive Director of Media Rights Agenda, told Daily Times on Saturday: “I was at the burial of Olaitan Oyerinde, Special Adviser and Principal Private Secretary to then Governor Oshiomhole. He lived outside the Governor’s quarters and there the assassins went to kill him there in Benin, right in the presence of his wife and children.”

The former Labour leader himself has had several close calls in ghastly accidents, which claimed the lives of his travelling companions. On not a few occasions, these accidents involved Oshiomhole directly and his ability to escape unscathed has given him the reputation of a cat-with-nine-lives. Some have gone as far as crediting his survival to the spiritual fortification by his centenarian mother living in Iyamho, Edo State.

Just last week’s Tuesday, the former Edo State Governor yet again narrowly escaped death by the whiskers in an accident that claimed the lives of two of his security detail, after a trailer rammed into his convoy around Oluku, on the outskirts of Benin.

An accurate diary of the fatal mishaps that have claimed the lives of Oshiomhole’s family and friends must chronicle the untimely death of his wife, Clara, and include fatal episodes resulting in the death of aides and comrades around him.

On September 21, 2005, a former students’ union President as well as a Journalist lost their lives while on a protest rally Oshiomhole led to Northern Nigeria. Comrade Chima Ubani, 42, one of Nigeria’s leading democratic activists, lost his life in that ghastly accident while returning to Lagos from a journey to Yola, Adamawa State, in the wake of a nationwide demonstration organised by the Adams-led Nigeria Labour Congress (NLC) against the Olusegun Obasanjo’s regime hiking of fuel prices. Ubani, the Executive Director of Nigeria’s foremost Human Rights group, the Civil Liberties Organisation (CLO), where he worked fulltime for 15 years, died at the spot. So did a Journalist from Vanguard newspapers, Mr. Tunji Oyeleru, while the driver, Sadiq Yakubu, and two police escorts sustained various degrees of injuries.

Although the ill-fated Toyota Land Cruiser served as Oshiomhole’s official car, the then NLC President escaped the crash because he took a flight back to Lagos after the Yola rally. The SUV had a tyre explosion at top speed on the Bauchi-Maiduguri expressway, causing it to somersault several times.

“This is a devastating loss,” Mr. Dave Peterson, the National Endowment for Democracy (NED) Director for Africa, said at the time. Peterson had worked with Ubani for 15 years, and described him as one of “Africa’s leading democratic activists, an intellectual and political strategist with an unwavering commitment to freedom and justice, not only for Nigeria, but for all mankind.”

In the first year of his tenure as Edo State Governor, Oshiomhole once more had his world shaken by another tragic road crash involving his close associates. Mr. Chris Nwachukwu, Chief Press Secretary (CPS) and Mr. Greg Haruna, Personal Assistant (PA) to His Excellency lost their lives on 13th December 2008 in a motor accident along Auchi-Benin Road. They were on their way to Auchi for a friend’s wedding ceremony. The Kia Ceranto car officially allocated to the CPS collided head-long with a bus at Agbede in Etsako West Local Government Area, in an accident that claimed the life of the two gentlemen.

It was a dark Christmas for Edo State’s “First Family” and the people in 2010. On 7th December 2010, 18 days to the Yuletide, the state shook with grief when Oshiomhole’s beloved wife and Edo First Lady, Clara, succumbed to cancer. She was 54 years old and had born five children, Cyril, Winnie, Jane, Steve and Adams Jnr. She breathed her last at the Abuja Clinic, Maitama, after a protracted battle with breast cancer. Adams himself blamed his wife’s untimely death on misdiagnosis of her ailment until too late. Reputedly a solid pillar behind her husband from his days as a frontline labour activist and through his political ascendancy in Edo State, the Late Mrs. Oshiomhole initiated the Health Foundation for Maternal and Child Care, a pet project aimed at providing quality healthcare for pregnant women and the girl-child. President Jonathan described her as a “heroine of justice and a strong supporter of the rule of law.”

The Governor would later in 2015 marry Miss Lara Fortes, a model from Cape Verde and erstwhile Air Hostess with Emirate Airlines.

On April 28, 2012, the families of three journalists attached to the Edo State Government House were thrown into mourning when their breadwinners abruptly lost their lives while travelling with Oshiomhole in the line of duty.
A tipper rammed into the Governor’s convoy along Warrake Road in Etsako West Local Government Area. The Press Bus took a direct hit, instantly killing Olatunji Jacob and George Okosun, both of the Benin-based Independent Television, as well as Fidelis Ohani, a Cameraman for the African Independent Television (AIT).

A Photo Journalist of the state-owned Observer newspaper, Mr. David Acha, and an unnamed driver went into coma. Six other journalists and a couple of security operatives in the bus suffered various degrees of injuries.

Special Adviser and Principal Private Secretary to Governor Oshiomhole, Mr. Olaitan Oyerinde, fell to the bullets of unknown gunmen who raided his Benin residence on 4th May 2012. The late Oyerinde hailed from Ede in Osun State, where his remains were buried eight days later.

Adeoye, the Late Oyerinde’s close associate, said: “We were very close friends and I even went to visit him in his office at Government House, Benin.

Olaitan was a brilliant student of the University of Lagos as well as a committed unionist in NLC before working as Personal Secretary to Governor Oshiomhole. But he lived outside the Government House and there the assassins went to kill him right in the presence of his wife and children. No one has been sentenced for the killing.”

Before his last position, Oyerinde had been a national officer of the National Association of Nigerian Students (NANS) from 1989 to 1990, and Deputy General Secretary at NLC, which he joined after serving as the Assistant General Secretary of the Iron and Steel Senior Staff Association of Nigeria (ISSSAN).
Oshiomhole always tied the killing of his deceased aide to the petition Oyerinde on his behalf and sent two days earlier to INEC Chairman Professor Attahiru Jega and the police, alleging a rival party’s plot to rig the Edo 2012 governorship election and destabilise the state. The Governor later rechristened after Oyerinde a street in GRA Benin City.

December 2013, a bus loaded with plantain rammed into Oshiomhole’s car, damaging the bullet-proof vehicle beyond repairs.

Oshiomhole once more cheated death by the whiskers last week’s Tuesday when a trailer rammed into his convoy just outside the Edo State capital.

The accident occurred after the Benin by-pass, around the junction of Oluku town, while the entourage that included other APC leaders travelled for a rally at Usen. It claimed the lives of two policemen, and left two others in critical condition.
Eyewitnesses said the crash occurred after a trailer veered off its course, hit the backup Toyota Hilux vehicle carrying the policemen and forced it into the bush after ramming into the SUV carrying Oshiomhole. The former APC National Chairman would later in a statement term the accident a clear assassination attempt on his life. Pastor Osagie Ize-Iyamu, the APC Governorship Candidate, echoed the sentiments.

OBOAGWINA IS A JOURNALIST AND HE WRITES FROM LAGOS