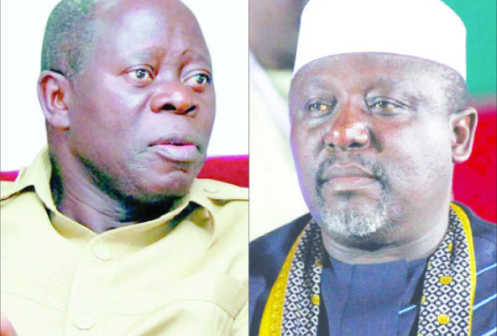 Imo State State Governor, Rochas Okorocha has attacked the National Chairman of the All Progressives Congress, APC, Adams Oshiomhole again, saying that with him in charge, the party will have a serious setback in 2023.

According to him, “My fear now is that APC may have a serious set back in 2023 because the Oshiomhole-led executive is actually turning APC into a regional minority party, which shouldn’t be.  Right now in the whole of South-East, we don’t have an APC governor.

“So, if there is any discussion in Nigeria now within the APC  governors and President Muhammadu Buhari, there will be nobody from the South-East. This is what the APC chairman has done in the South-East.”

On the Imo State governorship election, Okorocha said that the Peoples Democratic Party (PDP)’s candidate Emeka Ihedioha, did not win the election as he flouted Section 179 of the Constitution of the Federal Republic of Nigeria.

He said that the returning officer was not fit to be a professor; and should be charged for not respecting the Constitution of the Federal Republic of Nigeria.

Okorocha, however, attributed the All Progressives Congress (APC)’s poor performance in the state to the imposition of a candidate by the party’s leadership.

He also said that he was confident that the Independent National Electoral Commission (INEC) would issue a Certificate of Return to him as the Senator-elect for Imo West Senatorial District.

“As it stands today, I am just waiting patiently for the release of my certificate of return for an election that I duly won.

“INEC conducted elections, results were declared by the returning officer and I won; only to hear one week later that somebody wrote a petition that he made that declaration under duress; the question is where?

“So, who actually put him under duress? The man has not been able to say that; he has never made a statement about that. So I think INEC will want to do the right thing very soon.’’

According to Okorocha, he was in the Presidential Villa to request the president to visit the state to inaugurate his many projects.

The governor said that he had completed the new cargo airport terminal, warehouses and cargo shelves that needed to be commissioned.

He also listed other projects to include the Justice Oputa Court and the new Imo State High Court complex.

“So, we have well over a thousand projects verifiable to be commissioned; we are requesting Mr President to kindly commission the Federal ones and see how many of the state ones he can commission too.

“The 27 model hospitals are much bigger than the state will need, but those hospitals were built for possible concessions; as people come, they take over the hospitals and equip them.

“But we have some of them running already; the one in Ikeduru is fully running and is being taken over by an American company; we have some taken by some Churches and private organisations.

“That is our style of making Imo State a tourist destination for Nigeria by building those 27 general hospitals, a diagnostic centre, a free child and mother hospital and the Imo Medical Centre.

“So, put together, we have 30 hospitals with close to 10,000 beds built by this administration; those hospitals are futuristic so to say.

“They have been roofed; they have all been tiled and fenced; what remains is that we are looking for management because if you pack in now, you might not have the need for it; we are talking about the future, not now,’’ he said.

On National Assembly leadership, the governor said that the South-East should be carried along properly for the sake of balance in the politics of the country.

According to him, Buhari is a de-tribalised father who treats every Nigerian equally, irrespective of ethic nationality or religion.

Okorocha therefore, said it would be unfair for anybody to paint Buhari as a sectional leader.