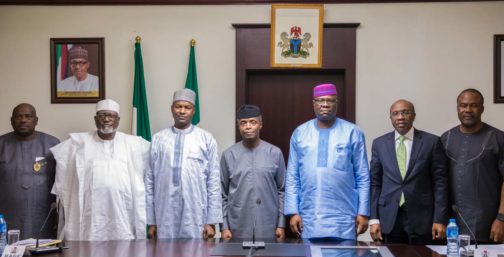 Vice President Yemi Osinbajo (m) with members of the National Sanctions Committee after their inauguration at the Presidential Villa in Abuja on Friday.[/caption]

The committee comprised the Minister of Justice, Malam Abubakar Malami, as chairman, the Minister of Foreign Affairs, Mr Geoffrey Onyeama, and the National Security Adviser.

Other members are the Director General of DSS, the IGP, CBN Governor and the Chief of Army Staff.

The mandate of the committee is to trace and freeze financial flows of terrorist funds.

At the event the Vice President reiterated government’s commitment to eliminating terrorism in the country.