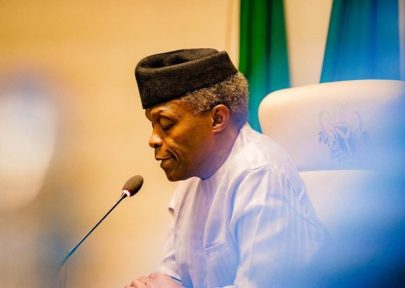 The Federal Government has inaugurated an inter-agency committee to speedily resolve the challenges in recovering over N5 trillion Asset Management Corporation of Nigeria(AMCON) debts.

Vice President Yemi Osinbajo, who inaugurated the committee at the Presidential Villa, Abuja, tasked its members to deploy their expertise in the assignment.

The committee is headed by the Chairman, Independent Corrupt Practices and other related Offences Commission (ICPC), Prof. Bolaji Owasanoye.

Osinbajo said that by constituting the committee, the Federal Government was adopting a new approach in recovering outstanding AMCON debts.

He urged the committee to turn the tide in what had been a difficult process where debtors have continued to default in their payment obligations.

About 67 per cent of the outstanding N5 trillion debt is said to be owed by just 20 individuals/entities.

Following the challenges encountered from the debt-recovery processes and the very limited results so far, the committee is expected to consider other options, including taking enforcement measures in actually recovering the debts.

“One of the terms of reference is for the committee to prepare a report, giving us a sense of what the timelines would be.

“I congratulate you on the very onerous task that has been set, to render this service.

“I know that, given the kind of individuals here, you will definitely turn this whole narrative around.

The vice president expressed confidence in the expertise of the team to carry out the task ahead.

Members of the committee include heads and representatives of agencies such as AMCON, the Economic and Financial Crimes Commission and Nigerian Financial Intelligence Unit.

Others are drawn from the Central Bank of Nigeria, Nigeria Deposit Insurance Corporation and the Federal Ministry of Justice.

The committee is expected to review the status of debts owed to AMCON, deliberate on practical, legal and other strategies for the recovery of the outstanding debts.

It is also expected to prepare a report, which will include a debt recovery work plan with specific timelines for completion.

Owasanoye thanked the vice president for the confidence reposed in the group, adding that the members would do their best to recover most of the debts.