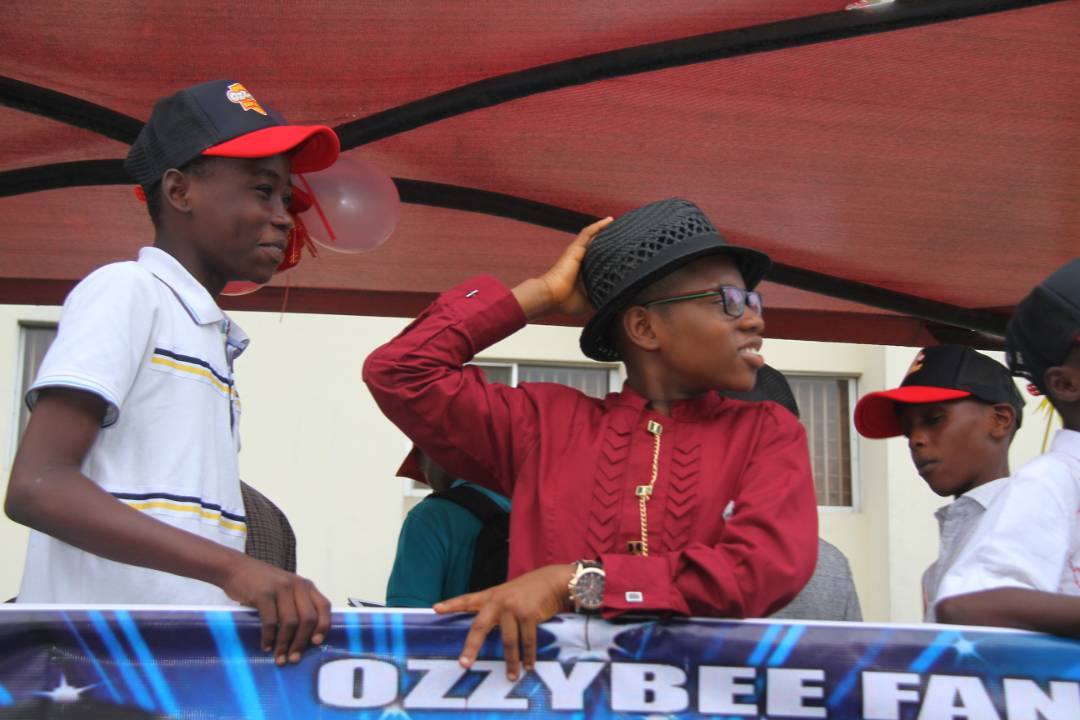 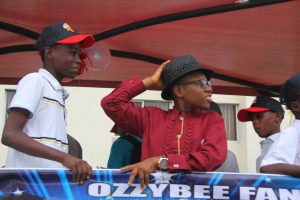 It was a three long busy days for the youngest entertainer in Africa, OzzyBee the WonderKid. Right from Sunday which was Children Day, OzzyBee was at Silverbird Galleria where in his usual way he thrilled the audience with superlative performances.
It wasn’t short of what people especially children were expecting as this precocious kid once again displayed another electrifying performance at Phamatex Children Party held at Basket Bowl of National Stadium. To the amazement of everybody OzzyBee aka OzzyBosco the WonderKid dazzled the Chairman of the company, Prince Nede as the elderly man stood up to dance to OzzyBee’s songs.
The long awaited event; OzzyBee and Children Take Over Lagos, a charity road show organised by OzzyBee Smile Foundation which is meant to reach out to the aged and some underprivileged eventually held on Tuesday, May 29th this is however to commemorate the annual Democracy Day.  The roadshow however light up his three long busy schedules. The train took off from 22, Sule Abuka, Office of OzzyBee Smile Foundation where children from different Secondary Schools, Members of OzzyBee Fans Club, staff of OzzyBee Smile Foundations, journalists and other stakeholders in the entertainment industry.
The first point of call was Ikeja Under Bridge where the train stopped as OzzyBee doled out cash gifts to elderly women. A particular soft-drinks hawker who claimed she earned her living and feed her family from her sales however met her luck as this 11 year old entertainer accosted and gave her cash-gift and ordered everyone around to take and drink from her which he later paid for. Many others elderly women benefited from OzzyBee’s largesse which we learnt ran to thousands of naira.
It was another stop- over at Mobolaji Bank Anthony way where the train stopped again and there many beggars around the area came and were fed. The ultimate however happened at Ozone Cinema in Yaba where OzzyBee became the cynosure just as he stepped into the Cinema. He was given a VIP offer to sell tickets to fun- seekers and this he did without any hitch while members of OzzyBee Fan Club, School children and other guests were given free tickets to watch movies of their choice.
Speaking with him OzzyBee the day is going to be a memorable one in his life.
” Today is my happiest day and I must say I thank and bless my God for blessing me to bless people, it’s one of my plans because time without numbers I did pass through many places and see elderly people who should have retired still hawking different wares. I took it upon myself and I told my God that I want to be of help, with the help of God and the assistance of my darling mum, we started working on it and today I’m grateful that God didn’t fail us because it has come to pass’
Speaking about OzzyBee Fan Club the artiste reiterates his promises ” OzzyBee Fan Club has come to stay, in fact the way interested people bombard our sites to register for membership is just too alarming. It’s a development that is going rapidly and I said it earlier and still repeating that members would benefits immensely from this. I mean benefits that are even beyond the shores of this country, just keep your hands crossed and all you need to do is to log on to:  www.OzzyBee.com/ofc and you’re there”.