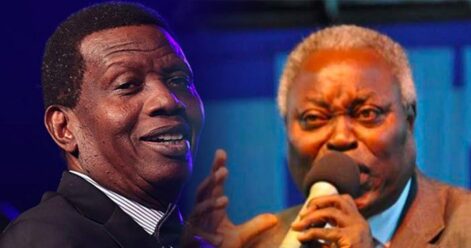 General Overseer, Redeemed Christian Church of God (RCCG), Pastor Enoch Adeboye has delivered a verdict on the General Superintendent of the Deeper Christian Life Ministry, Pastor William Kumuyi, describing him as one of the greatest teachers of the Bible in this generation.

Adeboye wrote the Foreword of the book, “Kumuyi: Defender of the Faith,” a biography written by some members of Deeper Life Bible Church.

According to Adeboye, “every man’s life is a story, through which the lessons of life, either positive or negative could be unravelled, for the inspiration required by others, to live a better life.

“No better story can be told among men, than that of a man whom God has specially chosen and commissioned to reveal Him to others, a man, who has himself sacrificed all earthly things, to allow God manifest Himself through him. The story of such a man no doubt, becomes the story of God’s manifestation among men.”

Adeboye added: “In our opinion, Pastor W.F. Kumuyi is one of the greatest teachers of the Bible in our generation. He will be remembered for generations to come for his in-depth exposition of the word of God, his passion for evangelism, his commitment to Christ and his life of purity and self-discipline, which combined to reveal the manifold presence of God among men.

The man of God stated that Kumuyi is a living testimony of the faithfulness of God to anyone who devoted his life and time to seek and serve God; a testimony which provided the inspiration and foundation for this book.

“Reading this book will help the readers to know how they can be more closely committed to God, seeing Pastor Kumuyi as a living example of how it can be done.

“I recommend the book without any restraint and believe it will be a source of blessing and inspiration to many,” he said.

ABU CELEBRATES HAMZAT AT 57, SAYS HE HIS A QUINTESSENTIAL LEADER