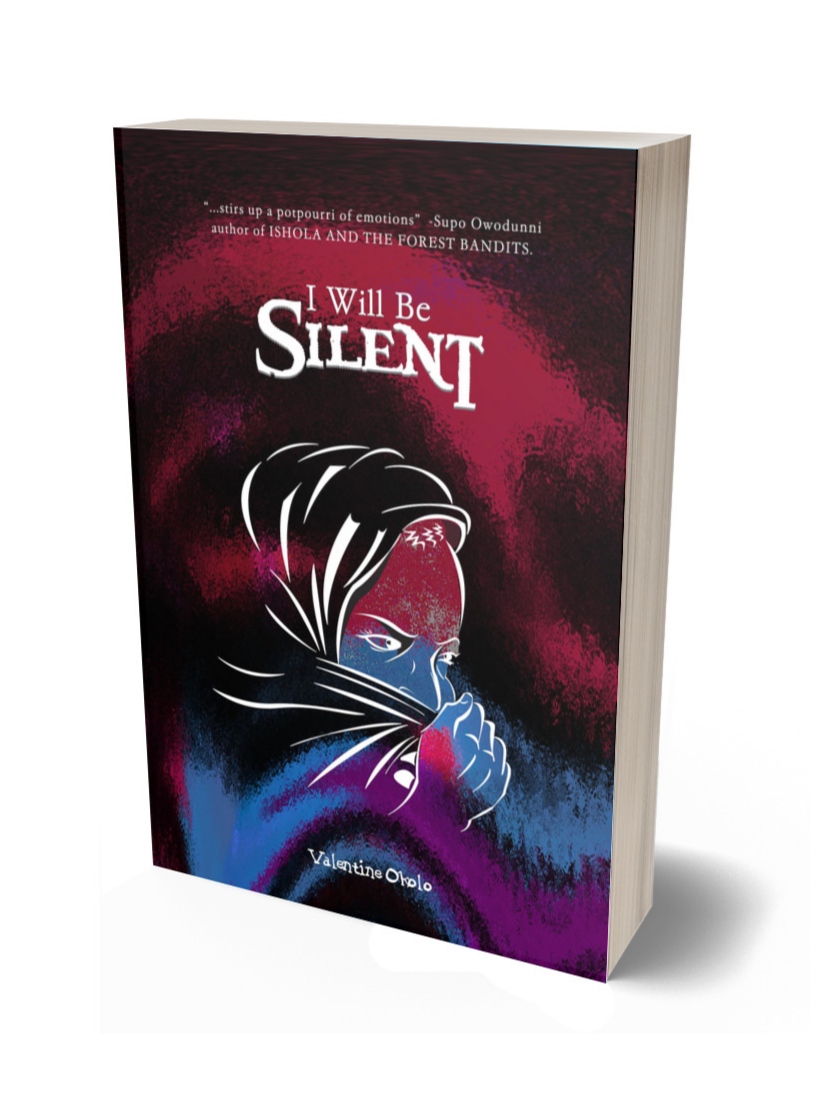 Here is an interview questions for Valentine Okolo, author of the thought provoking poetry book: I Will Be Silent.

Godwin Iheancho: Where did you get the idea for your most recent book?

Valentine Okolo: I got it from the title of a poem I wrote called “I Will Be Silent.” This was a poem I wrote concerning the genocide which happened in Darfur, Sudan, many years ago. I wrote it in response to the then international media blackout that occurred during that period and how men and young male children were systematically slaughtered by government supported Janjaweed militia. And how women were also gang raped, and impregnated by their oppressors, and sometimes mutilated.

In genocides rape is most times weaponized by the aggressive side, and the suffering sides to such wickedness are women, old and young. Such actions tear at my core and reveal mankind’s depravity at its worst. That poem and a few others similar to it form the back bone of the book.

Genocides, sex slavery, rape and a few other indignities suffered by many women in improvished regions of the world continue still. Boko Haram, and it’s aftermath, the Fulani Herdsmen follow in the footsteps of the Janjaweed militia in Sudan which commited those attrocities with government blessings.

In Nigeria, it is apparent that the government is in accord with Boko Haram and the Fulani Herdsmen as it has repeatedly played to the gallery whenever it is called to question regarding the poor equipments deployed and the improvishment of military troops sent to the effected regions to combat the insurgency. Rather, they result in the use of euphemisms by calling the terrorists “Bandits” and the deployment of mass media propaganda to negate the seriousness of the insurgency.

The entire idea of the book is centred around the themes of pain, and perseverance that these people, and may more like them in different regions of the world, face and have to endure constantly.

I Will Be Silent is not just a book to me. It is more than that. It is a call to witness. It is a series of poems which proceed not from the heart but from the gut of tribulation and endurance. It is a book which bears witness to the collected voices who cannot speak for themselves because they have been silenced.

Godwin Iheancho: How do you get inspired to write?

In my book I Will Be Silent I wrote many poems which grew from those two extremes. Or should I say, some poems made me write them inspired by these extremes of human existence.

I most times don’t plan a poem in advance. Some poems, if I may use the expression, fall at my feet, almost fully formed. They are a few poems, however, that I do make plans to write in advance. And in order to write them I have to enter into a period of poetic gestation. A period in which I allow the idea of the poem to take root and grow within me until it is ready to be birthed. Sometimes the gestation period may take a few days. Sometimes it can take months or even years.

Valentine Okolo: First, they should close their eyes and feel. And then write what they felt. Some of the notable works of literature (which includes fiction, non fiction, poetry, science fiction and so on) were written from an abundance of feelings. If you don’t feel what you have written, don’t expect someone else to feel it too. (Unless, you want to be too intellectual and write drab college textbooks.)

Your writing has to move you first before you expect it to move someone else. Write what you feel first. Then put it away for awhile, and then look at it again with the eyes of a stranger. If you read what you had written earlier with the stranger’s eyes and say to yourself: “Wow! Did I write this?” Then someone else will also be wowed by it as well.

Words convey emotions. Be successful in conveying your emotions in your lines.

If expressing your emotions is fuel for your writing, see style as your technique for progress.

See writing as you would a dance in progress. A dancer may have the necessary energy to prance about. But this prancing alone without an arranged motion may not result in anything beautiful to behold. A dancer uses learned dancing techniques and translates those techniques and that energy into beautiful motions (insert here any dance style of your choice: ballet, foxtrot, salsa, tango, hip-hop, contemporary, and so on). When done properly these motions of choreography capture your attention. For a writer, style is like those beautiful motions. Some you can learn from the writings of someone else. Some you can teach yourself.

If you can afford it, enrol into a good writing class with a teacher that you respect his or her style of writing. Such a person will help ground you in the proper techniques of sentence constructions, and the proper use of words, characterizations and lots more.

Godwin Iheancho: What’s the best thing about being a writer?

Valentine Okolo: It allows me to state what I feel. It allows me to display on a blank page the potency of my thoughts. I am a poet. And I write poetry. And to me words are not just a means of communication. To me words are life. Words carry with them a strong creative force. A force that makes things happen. The first thing that happened in the creation of this planet was the issue of a command. From God Almighty Himself. As documented in the Bible book of Genesis where it was written that there was darkness every where and the Earth was void and without form and the Spirit of God was hovering over the deep. And God Himself uttered the immortal words that started the beginning of life in this world. He said: “Let there be light.” And lo, light came to be. And illuminated the perpetual darkness.

Jesus Christ Himself used words to heal. It was written in the Gospels that He issued words of command and the blind were made to see, the lame walk, and the diseased were made clean. Even to the point of raising the dead. The words: “Lazarus, come forth!” are perhaps one of the most unforgettable lines I have ever read in any form of literature. Because they were more than just words. A mummified man who was dead for four days heard them from beyond the grave and rose to life!

Godwin Iheancho: How do you deal with writer’s block?

Valentine Okolo: I empty my mind. And do something else that is not related to what I am writing about. Sometimes I take long walks, and focus on being in the present. As I walk, I take note of the rise and fall of the land, the diverse faces of people, the roaming animals, and the sounds coming from cars and motorcycles. Most times when I do this ideas flow to me freely, clearing my imaginative inhibitors.

Get the book: I Will Be Silent on Amazon: www.amazon.com/author/valentineokolo