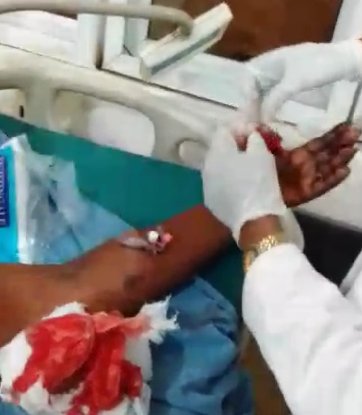 The Ogun State Police Command said they have arrested three suspected Fulani herdsmen for allegedly attacking a woman in Oru community of Ago-Iwoye with guns and machete which resulted in cut off of one of her fingers.

The victim, Morounkeji Salami who is now on danger list in a hospital following severity of the attack, was said to be returning from her plot of land, when the suspects launched violent attack on her.

The suspects said to be about eight, realizing the bodily damage inflicted on the woman following gun shots, and the fear that they may be caught, took to their heels , abandoned their cows, with aim to return when normalcy return to the vicinity.

It was gathered that following information about the attack, the police rushed to the scene, and discovered that the suspected killers have ran away, leaving behind their cows, but the police resolved to keep surveillance in the area.

The victim was later rushed to the hospital in Ago-Iwoye by sympathizers, but following the severity of the injury sustained, the hospital advised to be taken to a better equipped hospital, hence, the family moved her to hospital in Ikeja, Lagos State.

The suspects, unknown to them that police kept them under surveillance, at about 10pm, returned to the scene, to move away their abandoned cows, it was at this stage the police swooped on them and arrested three, while others managed to escape.

The Ogun State Police Command Public Relations Officer, Abimbola Oyeyemi when contacted confirmed the incident, adding that three of the suspected herdsmen have been arrested, while intensive investigation has commenced.

Yes, the incident is true. We have arrested three of the suspects and they are in our custody, and we have equally commenced proactive investigation, and very hopeful that, the other suspects on the run are arrested in due course’, Oyeyemi said

The police spokesman assured that, the runaway suspects will be arrested in due course, emphasizing that the command will make the state not conducive for any criminals, and that the police is up to the task.