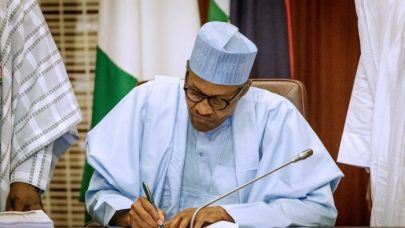 According to a statement by the President’s Special Adviser on Media and Publicity, Mr Femi Adesina, in Abuja on Saturday, President Buhari also congratulated the Communist Party, and the people of China on the anniversary.

A letter from the Nigerian leader to the Chinese President read in part:

“On behalf of the Federal Government of Nigeria, I felicitate with Your Excellency, the Communist Party and the people of China on the occasion of the 70th anniversary of the establishment of People’s Republic of China.

“The past seventy years have been decades of political steadfastness, remarkable development, dedication and purposeful leadership leading to the emergence of the People’s Republic of China as a global power-house.

“I rejoice with the hardworking and patriotic people of China who have demonstrated over the years a very high sense of unity of purpose, immense hard work, patriotism and full confidence in their leaders.

“I cherish the partnership between China and African countries under the umbrella of Forum on China – Africa Cooperation, FOCAC, which is breaking new frontiers for the development of Africa in a mutually beneficial environment.

“I am also excited about the ever-increasing level of cooperation between our two countries.

“Once again, I congratulate you and all Chinese worldwide on this landmark celebration.”