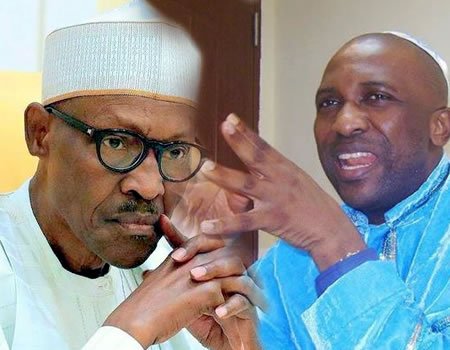 He also prophesied on the expectations of the recently launched Coalition for Nigeria Movement (CNM), as well as issues affecting the polity, economy, herdsmen’s attacks, forthcoming elections in Ekiti and Osun states, Trump’s presidency, among others.

Speaking in an interaction with Sunday Tribune, he specifically advised President Muhammadu Buhari not to seek reelection, urging him to instead step down for Senate President Bukola Saraki.

He said: “President Muhammadu Buhari’s time is over in 2019. If Buhari re-contests, Nigeria will sink and there will be problems which may even result in bloodbath. We have three options: we either operate a regional system of government; we separate, or Buhari steps down for Senate President Bukola Saraki, for peace and security. The plot in the Senate cannot overcome Saraki. A lot of things have gone wrong under Buhari in the present administration. There is trouble ahead of 2019 if clerics and Nigerians do not seek divine intervention. We need prayers to sustain Nigeria beyond 2019.

“The National Assembly has taken the right steps on many issues. If the All Progressives Congress (APC) presents Buhari as its presidential candidate, he will fail. He is no longer Nigeria’s ‘messiah.’ And if Saraki doesn’t run for presidency, he is in trouble.

“For the Coalition for Nigeria Movement (CNM), it will be tough. I see a kind of amalgamation of some parties coming together. There will be trouble in Buhari’s cabinet. Unemployment will be a tough issue for the present administration, despite attempts to improve the situation.”

Only if the APC picks the right person, can they win in Ekiti State. APC in Osun State must embrace unity.

Chief Odigie Oyegun as APC chairman will face criticism and APC will try to settle internal crisis. Obasanjo’s CNM will only work if they pick the right people that will make it work. At the end of it all, there will be much pressure on the CNM and they will not quickly reach an agreement on certain issues. However, they will keep the APC and the PDP on their toes. They will stand as a threat to the two major political parties. There will be resignations in Buhari’s cabinet.”

While stating that he had nothing against president Buhari, he noted that “Buhari will take various steps to balance but the point is that his government is weak and a ‘cabal’ has held his government to ransom.”

THE TOP10 MAGAZINE TO INVOLVE PUBLIC IN SELECTION PROCESS