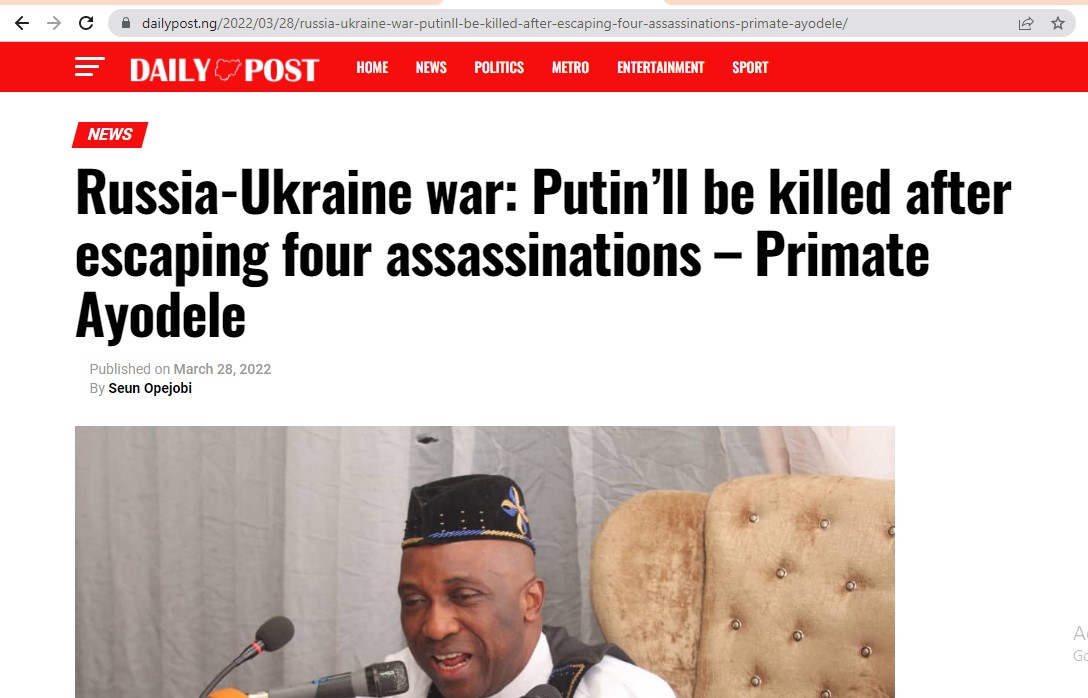 When Russia’s President, Vladimir Putin started a war with the invasion of Ukraine some months back, the prophetic voice that sounded a strong warning to him was Nigeria’s Primate Elijah Ayodele.

Though the prophet had revealed that he foresees an escalation and destruction of things between Ukraine and Russia which happened when the war began, he continued to speak regarding the war.

One of his first statements to Putin was to put an end to the war if he doesn’t want to be assassinated or killed by some of the people he trusts. He warned that Putin will not go scot-free because God is not in support of the war he is fighting.

The fearless man of God added that Putin will escape assassination attempt four times but at the end of the day he will be killed and will not achieve his close down the chapter of Ukraine as a country.

“There will be an assassination attempt on Putin’s life, he will escape four times. They will find all means to appease Putin but he won’t listen. At the end of the day, he will not be able to achieve his aim which is to close the chapter of Ukraine as a country. At the end of the day, Putin will be assassinated though it will take time, but that’s what will lead to his end”.

Just as the man of God said, news reports making rounds has it that President Putin has just survived an assassination attempt on his life while he was going to his residence.

The Mirror, a UK daily, reported that Putin was in his limousine when a “loud bang” was heard from the left front wheel of the car followed by heavy smoke.

Putin managed to escape unhurt following which he was quickly taken to safety by his personal security guards.

It is unconfirmed when the incident took place, but reports suggest that the attack happened this week amid the Russia-Ukraine war. The information on his assassination was released on the General GVR Telegram channel on Wednesday.

It said that multiple arrests have been made from Putin’s security services, as some of his bodyguards reportedly vanished amid speculations that secret information about the 69-year-old leader’s movements was leaked.

Primate Ayodele had said he would be assassinated after escaping four times amidst the war, the first one has fulfilled the prophecy of the man of God.