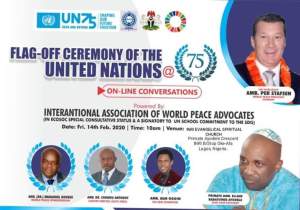 The leader of INRI evangelical spiritual church, Primate Babatunde Elijah Ayodele is set to host the United Nations for the official flag off ceremony of the 75th anniversary of the body.

The flag off ceremony is set to come on Friday, 14th of February 2020 at the church premises in Lagos state.

The event will also host several dignitaries who will be revealed later.

According to the man of God, the event won’t just be an official flag off, but will also be a moment to empower people.

It would be recalled that late last year, Primate Elijah Ayodele was honoured with the United Nations Eminent Ambassador Of Peace award in Lagos for his relentless contributions to the society and global humanitarian services and, above all, for being a man of peace.

Primate Elijah Ayodele has also been known for his philanthropic act, his prophetic excellence and his many exploits in all walks of life.