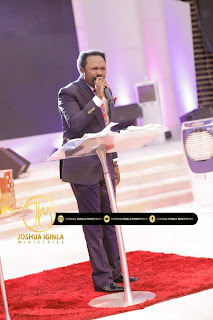 The General Overseer Of Champions Royal Assembly, Prophet Joshua Iginla has raises an altar prayers for Nigeria over the forthcoming 2023 elections. And this is not unconnected to the grave vision he received concerning it. Aside the prayers which he enjoined both the youths, Christians and muslims to partake in, he also released strong prophetic warnings to Nigerians concerning the 2023 presidential elections.

During a live service at his South Africa branch, Prophet Joshua Iginla revealed that God spoke to him about sensitive things concerning the election especially on mysterious things that will happen and not the person that will emerge as the next president.

He started by appreciating the Youths for waking up and creating awareness on getting permanent voters card and commended Christian bodies for praying concerning the country.

Iginla reminded Nigerians of his 2022 new year prophecy that talked about the year being mysterious. He asserted that he stands by the word of God concerning the year, stating that God has only shown him part of what will happen.

‘’I know the moments are very sensitive in Nigeria and becomes of the sensitivity, God spoke to me about something very sensitive.I want to start by appreciating the youths of Nigeria for their gallant consciousness about the next election in 2023, Nigeria is a project in the hands of God and for the first time, the youths in my country woke up from their slumber, they are sensitive, matured, calculating, getting their voters card, May God strengthen you all.’’

‘’The Christian body; churches, pastors, prophets are also praying, so many school of thoughts, I want to appreciate everybody for what you are doing for this country. I remember saying at the beginning of this year that God spoke to me concerning 2023 and he said it is a year of mystery, I see light in darkness and darkness in light. I still stand on that position of what God said to me that we need to be very careful especially prophets, we should be very careful because it’s a mysterious year. Even me, I only see part of what God has shown me.’’

Prophet Joshua Iginla revealed that he is not going to mention the name of the next president of the country as he isn’t coming from that angle but what God has shown him which Nigerians need to pray about. He spoke in parables while noting that he is afraid to say what he saw.

Prophet Iginla asked Nigerians to pray for the current leaders to finish well and for the 2023 election to go smoothly without any roadblock and manipulation. He made it known that Nigerians need to pray against a conspiracy theory which is pregnant with a lot of meanings.

Continuing, He urged Nigerians to pray against the enemies of the country making moves that will make history repeat itself in an alarming form.

‘’Many are expecting me to mention a name but I’m coming from another perspective and this part is what we should pray about. I will speak in parable because I am afraid to say what I saw.’’

‘’Let us pray for our current leaders to finish well what they have started, let us pray for the 2023 election to go smoothly without any roadblock and manipulation. Let us pray against a conspiracy theory that I don’t want to explain, it is pregnant with a lot of meaning. While others are busy talking about who will become the next president, it is important we pray about this.’’

‘’Let us pray that the enemies will not throw Nigeria into total darkness before the election and after the election so that history will not repeat itself in an alarming form. Telling you the next president is not as important as this vision. Take note of everything I have said, when God reveals, he does to redeem, our prayers should be more that there should be no systematic failure.’’