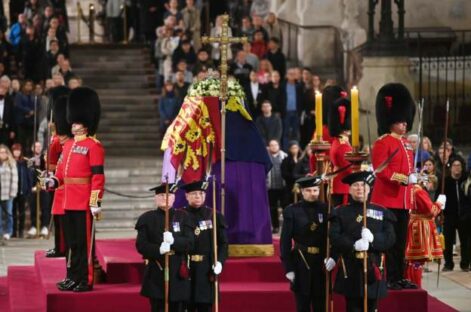 The remains of Queen Elizabeth II will be buried today. World leaders, Royals and the entire UK will bid her farewell today at a grandeur funeral ceremony.

The longest resigning monarch died on September 8 at the age of 96 due to old age at the Balmoral Castle, Scotland. She was on the throne for 70 years.

Life will come to a standstill for millions on Monday as the UK says goodbye to Queen Elizabeth II. The state funeral for her will take place at Westminster Abbey in London at 11:0oBST, with 2,000 people in attendance, including about 500 heads of state.

According to the BBC, hundreds of thousands of people are expected to line the streets of the capital.

A holiday has been declared in the entire UK for millions to bid their late Queen farewell. Ahead of the funeral, King Charles said he had been “deeply touched” by public support for him and his family

Foreign royals and world leaders will join the Queen’s family for a service that will be watched by hundreds of millions globally.

By 6:30am, the window for the public to see Elizabeth II lying in state comes to an end, as the doors to Westminster Hall are closed. By 8:00am, doors of Westminster Abbey open for the 2,000 guests expected – from world leaders to charity workers and the Japanese emperor, while at 10.44am, the day’s first procession will set off, with King Charles and other senior royals walking behind the Queen’s coffin as it’s pulled by sailors on the State Gun Carriage from Westminster Hall to Westminster Abbey.

The funeral service, which will begin by 11.00am will end at 12:15pm a second, larger procession brings her coffin to Wellington Arch.

at 13.00, her coffin is transferred to the state hearse and driven to Windsor along a route expected to be lined by crowds, while at 15:00, the day’s third procession begins, through the grounds of Windsor Castle to St George’s Chapel.

At 16:00, Committal service takes place at St George’s Chapel while at 19:30, Royal Family returns to the chapel for a private burial service that will see Elizabeth II interred alongside her late husband, the Duke of Edinburgh.