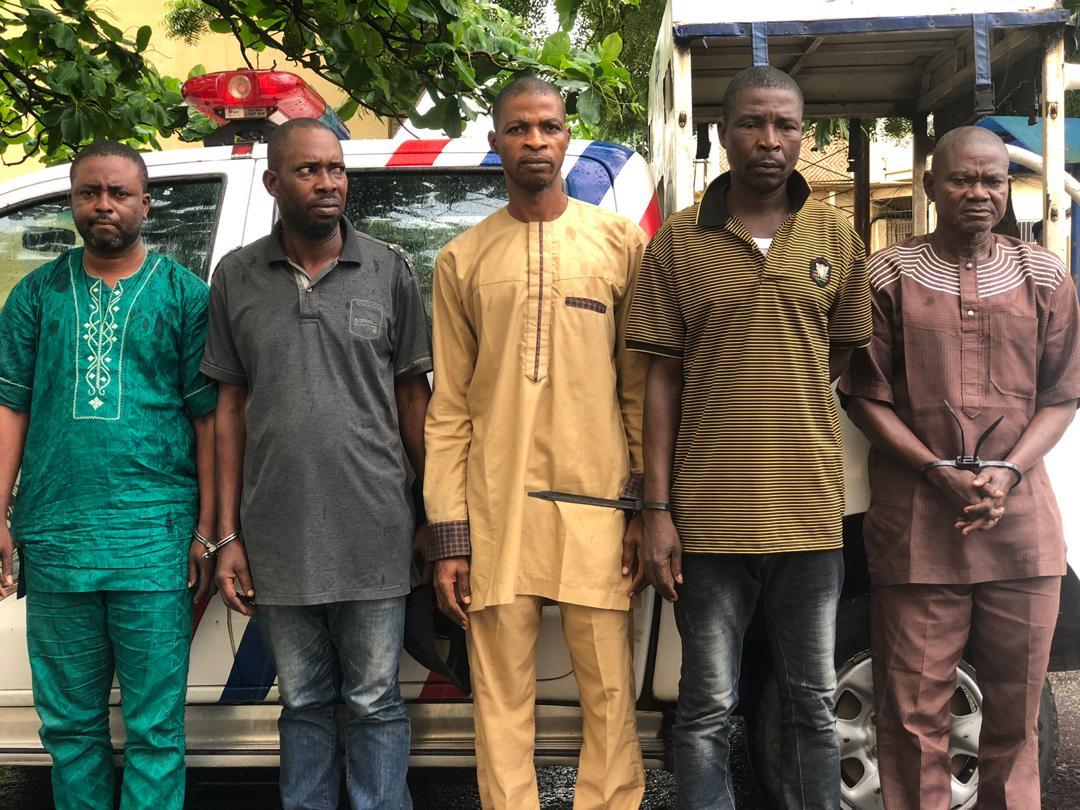 A five-member gang of real estate scammers, who were about to fraudulently lease out someone else’s duplex in Lekki Phase 2 to a house seeker for a sum of N4.5 million were on Wednesday, arrested by the operatives of Rapid Response Squad (RRS) at the point of exchange of money and keys.

The gang, which consist of; Abolade Oladimeji (43), Ademola Ayo (45), Emmanuel Fabiyi (65), Ademola Hakeem (49) and Sunday Ayodele 52-years were arrested in Lekki Phase 2, after almost sealing the deal for the leasing of someone else’s duplex to one Mr. Obi (not real name).

The suspects all of whom are real estate agents living in border towns of Lagos and Ogun had pretended to be agent of the duplex. To expand their dragnet, the suspects had advertised the property on jiji.com with a total lease package for a year put at N4.5 million.

According to the leader of the gang, Ademola Hakeem, he had been using his knowledge of computer to post for sale and lease on various websites non-existing landed property, apartments and buildings. He added that they lure unsuspecting publics with attractive prices.

In his confessional statement to the police, Hakeem disclosed that in early September, he posted a vacancy of a 4-bedroom duplex in Lekki Phase 2 which attracted so many people amongst whom was one Mr. Obi.

“Immediately he called me through the contact on the advertisement, I knew he was genuine. I mobilized my colleagues and allocated roles to each of them to make the deal seamless. Abolade Oladimeji conducted himself as the estate lawyer. He discussed at length with our client on the legal angle as well as visitation before payment”, he stated.

“Ademola Ayo was in charge of taking client on house or land inspection. Emmanuel Fabiyi, the eldest among the team played the role of a principal agent and sometimes acted as site engineer while Sunday Ayodele assisted Fabiyi to make him look like a big man who is well groomed and seasoned in the business”, he explained.

“After the inspection, Mr Obi requested to pay us with a cheque. Initially, we rejected as our mode of payment is through bank transfer. This is to avoid too much contact as we have dedicated account owners who connive with various teams of fraud syndicates that receive deposits into their accounts and collect 30% of the proceed. After much deliberation on the mode of payment, we agreed to collect the cheque.”

According to sources, Obi was trying to dot the i’s and cross the t’s of the lease when along the line he suspected something fishy. “He did a little research which took him to the real landlord of the estate. Together, they played along with the fraudsters while a police team was briefed on the development”, the source added.

It was further revealed that the Decoy Team of the RRS ambushed the fraudsters and arrested the five of them at the various positions at the venue of cheque collection in Lekki Phase 2.

According to Emmanuel Fabiyi, popularly called Baba, “my age has been so instrumental in the various scams we’ve perpetrated. Unsuspecting victims get convinced that a man of my age wouldn’t be a scammer. This make them want to do business with us and part with their hard earned money for land purchases, rent or lease of properties”.

Baba disclosed that the police made them repay N3.2 million in one of their recent scams. He added that the gang had been involved in many successful property scams both in Lagos and Ogun State.

While pleading never to return to business if allowed to go, he stated that his family had warned him not to get involved in any fraudulent deals again. He lamented being a disgrace to his wife and children as a father.

“Am a shame to my family as an elder in church and a grandpa. My children warned me to desist from fraud after I was arrested last year but I didn’t listen to them”, he stated.
He added that the N4.5 million was to be shared in the following manner; “the account owner collects 30%, Hakeem, the bringer of the deal collects 30%, Abolade 10%, Ayo, 10%, Baba, 20% and shares 5% with Sunday Ayodele.

The Commissioner of Police, CP Zubairu Muazu while reacting to the incident advised Lagosians to be more careful while dealing with estate/property agents and always request to see the owner of the property, and also verify his/her identity before parting with their hard earned money.