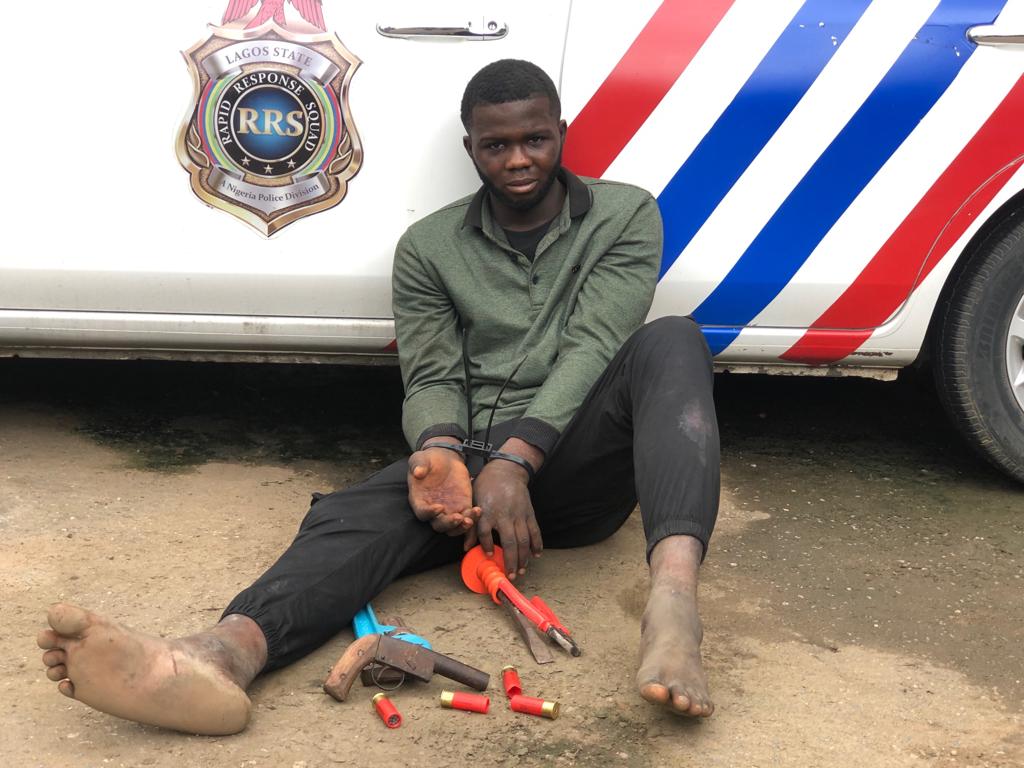 A suspected robber arrested by the operatives of the Rapid Response Squad (RRS) of the Lagos State Police Command has disclosed that he broke into a Night Club in Igbobi area of Lagos State to raise money for a member of his gang in order to perfect his bail condition from Kirikiri prison.

The suspect, Sadiq Yinusa, 25, of 24, Oluwalogbon Street, Shomolu, Lagos, was arrested at the night club (name withheld) in Igbobi while attempting to rob the club supervisor, at around 2.45 a.m. on Wednesday.

Yinusa, from whom a locally made shot gun, 4 live cartridges, a socket wrench, a chisel and a plier, were recovered from after shooting the night club supervisor, name withheld, disclosed to the police that he was assisting his imprisoned gang member to raise fund to perfect his bail conditions.

According to him, “Prince Chika, currently serving prison sentence in Kirikiri for robbery, called me last week to help him hassle around for funds to secure his freedom from prison.

I have visited him in the prison a week ago and he had called me from prison to appeal for my assistance. He gave me the location of this gun and some of the arms he used.

He has assured me to pay back within the first few weeks of regaining freedom. I retrieved all these arms from the bush where he kept them before heading for the operation”.

“He told me that he bought the gun in Anambra State for a sum of N5000. Yesterday was the first day I would fire a gun during an operation.

Everybody had already left the club in Morocco Road, Igbobi when I scaled the fence. I saw the supervisor, and at gun – point I requested for his wallet.

I felt he was wasting time, so, I shot him but he dodged it and raised alarm. I was escaping when I ran into a patrol team of RRS men responding to distress noise”, he explained.

“I was a pickpocket and a burglar before venturing into robbery. Last week, I broke into three houses in Somolu. From each of the houses, I collected two mobile phones of my victims. I also got three laptops as well as jewelry. I sold them to Adamu Jubril.

Whenever, I collect ATM cards from victims, it is Korede Baki (22) that assist me in doing the withdrawals. I collected the PIN along with the ATM card at gun point.” He concluded.

According to Jubril Adamu, popularly called Ango, a trader in Tejuosho Market, Yaba, “I have been buying stolen items from Yinusa for over six months now. I have bought over 15 mobile phones, laptops and jewelry from him. I bought laptops from him at N30,000:00 each.”

Also arrested with the suspect were the receivers; Jubril Adamu and Korede Baki.

The Commissioner of Police, CP Zubairu Muazu in his reaction to the arrest encouraged Lagosians to take time out to get to know their neighbours, adding that policing would be a lot easier when we embrace the fact that policing is everybody’s responsibility.

Okonjo-Iweala in trouble over Ogwashi-Uku stool, dad alleged to be ‘regent, usurper’