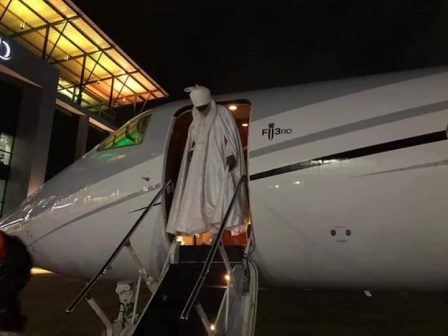 Muhammadu Sanusi II has now put the horrors of the past five days behind him as he landed in Lagos in a private jet at 11.35pm on Friday.

It was a relieving climax for a day that began with the visit of Kaduna Governor Nasir El-Rufai, Sanusi’s leading the Friday prayer in Awe and his speaking about his dethronement philosophically.

Then came the order from a Federal High Court in Abuja asking his captors to release him immediately.

El-Rufai and Sanusi in Awe on Friday morning

Sanusi’s nightmare began on Monday, when he was suddenly dethroned as the Emir of Kano by Governor Abdullahi Ganduje, for what his government called ‘insubordination’ to lawful authority.

Muhammadu Sanusi prays, 3rd left is El-Rufai who saw the emir off

Moments after the police and the DSS operatives stormed the palace to drive him, first by flying to Abuja and then by road on a seven hour gruelling journey to Loko, a town on the banks of Benue River in the central state of Nasarawa. They had rejected Sanusi’s appeal to let him go to Lagos.

The security agents, ignorant of the Nigerian constitution said the emir was banished to Loko, based on a colonial law. But the following day, the Emir was moved to Awe, in the same state, on the intervention of Nasarawa governor Abdullahi Sule and the Emir of Lafia, Sidi Bage.

Sanusi’s lawyers went to court on Friday and got an exparte order to free him from his abductors.

He is now in Lagos, where he attended secondary school as a youngster, graduating in 1977 and returned later to spend decades in the banking sector before his appointment as Central Bank Governor in 2009.

“We’ve finally arrived in Lagos, In Shaa Allah this drama is behind us now”, tweeted Ashraf Sanusi, one of the emir’s children.

Ashraf also thanked the people of Awe for hosting his dad since Tuesday:

The people of Nassarawa have been so kind to us, we are thankful for such amazing supporters, the support, love and respect for HH is amazing here. Do not let people make you believe this good man is hated. May Allah bless you all.2,3015:03 PM – Mar 13, 2020Twitter Ads info and privacy502 people are talking ab

COVID 19: FIRSTBANK DONATES 1BILLION NAIRA, REITERATES ITS COMMITMENT TO THE SAFETY OF ALL NIGERIANS